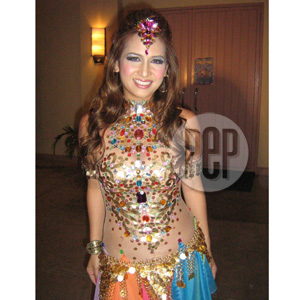 The Philippines' first-ever belly dance festival was held last June 9 at the Henry Lee Irwin Theater of the Ateneo de Manila University. Belly Fest 2007 was a showcase of the country's most popular belly dance performers. More than 50 dancers from Manila, Cebu, General Santos, Cagayan de Oro, and Zamboanga graced the stage after practicing four whole months for the event.

"It's a fiesta for the belly dance culture," said Unang Hirit host and belly dance enthusiast Regine Tolentino. "It's pretty much to show off all their interpretations of modern, traditional, and classic styles of belly dancing."

But the most whopping shocker of the show was a little-known, six-foot- something, male belly dancer, who stole the thunder from the likes of Regine and former Whiplash Dance Company member Jill Ngo-Crisologo.

Zumre, who hails from Zamboanga, did American tribal style belly dance, which is inspired by American sensibilities. In dark, folklore-inspired costume, he performed three numbers—to the bewilderment of the audience.

"It is different from the cabaret style which we are familiar with," admitted Jill of Peak Performance Dance and Fitness, the group that organized the event.

But what kind of belly dancing is familiar to Filipinos? Did a male belly dancer reveal a side not shown in Beyoncé Knowles' and Shakira's music videos? According to the online dictionary Wikipedia, most people associate the dance with "harem fantasy productions of vaudeville, Burlesque, and Hollywood." Thus, a lot of Filipinos look at it in a racy way. In Egypt, where belly dance was said to have originated, there was even a ban on foreign belly dancers for a year.

Of course, that didn't stop Jill and other belly dancers from shimmying bellies at the event. "Hollywood's version is just that—a version," she said. "I say if it's performed by a good belly dancer, you appreciate the skill, not the body."

The belly dancing and fitness instructor adds that belly dance is also an effective way to stay in shape. "Some martial artists are tasked to learn belly dance because it helps them with brain-body connection. And you get to move the spine, not just the limbs," explains Jill.

Regine agrees: "The best part of belly dancing is that it's for fitness. Four years ago, when we did a belly dancing instructional video, we did it for fun. It was something that really attracted me because you fell feminine, sexy, maganda yung mga costumes. And the moves are very sensual. Basically, it's an art and at the same time, you're burning calories."

Aside from the three mentioned performers, the other lead dancers were: Gemma Magtibay, Gladys Catanduanes, Arcel Benson, Lovely Aricheta, Papes Lao, and Nilda Baquiren. All pulled off easy-on-the-eye performances, shifting circular motions from the belly to another part of the body. The huge number, however, of performers made the show seem drawn out. Watching belly dance for four hours was quite tedious.

The Company of Ateneo Dancers showed off a mishmash of jazz, ballet, and hip-hop moves, though some steps were awkwardly achieved.

Slight snags, too, were the ill-considered lighting and sub-standard sound equipment. But though some layers of the Middle-Eastern music were barely audible, the first Belly Fest's message was clearly heard: Filipinos still have a lot to learn about belly dancing. In a charming yet telling number, five-year-old dancers Tricia Chan, Marga Francisco, and Mica Lim even took to the stage to teach basic belly dancing steps to the audience.

A fulfilled Jill spelled it out well: "Belly dance doesn't choose. Anyone with a spine can try it. Those are the only requirements."

All in all, we are looking forward to the next Belly Fest. In the long run, who knows, male celebrities could follow Zumre's lead and take up belly dancing to keep fit.