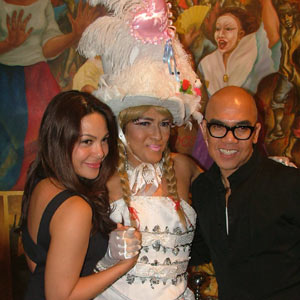 A statement was released by the Philippine Educational Theater Association—better known as PETA—about KC Concepcion, who sponsored three nights of its highly successful musical, Care Divas.

"In between movie shootings," the PETA statement went, "numerous television appearances and her advocacy work as National Ambassador Against Hunger for the United Nations' World Food Program, media darling KC Concepcion reunites with her 'first love.'

"It is directed by Maribel Legarda, written by Liza Magtoto, with music by Vincent De Jesus."

Last April 2, a couple of days before she celebrated her birthday, KC was seen entertaining her guests and friends at the PETA Theater Center, the place where she held her sponsored three evening performances of Care Divas.

KC, who is said to be an instinctive and spontaneous Arian, decided to produce three additional evening performances of Care Divas, just shortly after the show closed at the PETA Theater Center last March 13.

Being a graduate of the American University of Paris with a minor in Theater Arts, the theater is obviously one of KC's "first loves."

In fact, KC was in her teens when she started auditioning for musicals. She first landed a role back in 2003 when she played Princess Sapphire for The Little Mermaid for Trumpets Inc.

Two years after, she played Belle in Atlantis' Beauty and the Beast, and then Katy de la Cruz in the musical concert Katy in the year 2008.

Apart from her love for theater, KC says she was easily drawn to the musical Care Divas as the play's plot revolves around OFWs. Not known to many, KC considers herself an OFW.

Despite her celebrity status, and her family's fame and wealth, KC juggled three jobs while she was finishing her college degree in Paris, as her parents, likely wanting to teach her independence, sent her money only for rent and basic necessities.

Aside from reuniting with her "first love," KC combines her love for theater with personal advocacies and chosen causes.

A portion of the proceeds of her shows will be donated to the Chameleon Association in Iloilo, a shelter that provides safe haven for young survivors of sexual abuse.

During the shows at the PETA Theater Center, KC supplied information material about the foundation to generate more support for it.

KC's Care Divas sponsored nights are open to the public.

There will be three evening performances at the PETA Theater Center on May 6, 7 and 8 at 8 pm.