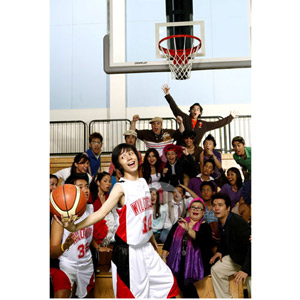 Sam Concepcion (foreground) is Troy Bolton, a young basketball jock who tries to fight off peer pressure and parental expectations as well.

High school was not a fun ride for most people. There's the time when the girl of your dreams, the Holy Grail of your whole batch, swatted away your pathetic impression of Freddie Prinze, Jr. There's also the time when you tried out for the basketball varsity in the hope of leading your school to the championship—with girls from exclusive schools going nuts about your every move on (and off) the court. But being short, having no leaping ability, and worst of all, having no game can only get you as far as P50 general admission tickets to the UAAP Juniors Finals.

For most of us, high school may have convinced us to flirt with illusions of grandeur that, in the end, left us disillusioned.

High School Musical, STAGES and Trumpets Playshop's latest production, brings you back to those times when you flirted with the idea of hooking up with the most popular girl in school or the idea of becoming the next basketball demi-god. It brings you back to those times when you wanted to be someone else. Only to find out you could never fill the shoes of that someone because you never realized (or you did, but it was too late) that all you had to be was yourself.

High School Musical is a story about a basketball jock named Troy Bolton (Sam Concepcion) who suddenly develops identity issues when he meets and falls for the typical beauty-and-brains character, Gabriella Montez (Cheska Ortega), who develops the same crisis as well upon seeing the hunky athlete (athletes never had it this good). But what do you do when peer pressure is breathing down your neck and your status—in your school and among your friends—is on the line? Will you surrender to the norms and do what is expected of you? Or will you damn them all and pursue what your heart truly desires?

The production had minimal, forgivable flaws—from the sometimes weak, inaudible audio to that annoying buzzing sound whenever the actors spoke their lines. But because the songs were from the Disney TV special, they sounded good.

The cast, composed of members of STAGES and Trumpets Playshop, obviously had fun throughout the play, although you couldn't help but wonder if all 40 of them had to be there. Only a handful of the actors were worth remembering, but not because the others were more talented or had meatier roles. The story could have moved along well without the extraneous cast members who, if they weren't singing and dancing, would just be nodding their heads at someone's lines.

Yes, there is the impression that the musical was on a grand scale because of the myriad characters. But having that many characters onstage simultaneously, could be distracting especially since the actors are just teens we barely know.

Also, there is an issue that needs to be addressed here for all casting directors or producers out there: Please, don't cast against type. Or if you do, make sure the actor can pull it of.

Nothing against Sam Concepcion—the boy has more talent than 90 percent of the young actors in this country. But Sam as a basketball jock is a bit of a stretch here. He's reed-thin, has a really high, pitchy voice, and seems to be on the verge of breaking into a moonwalk after every line he utters. And in one of the last scenes of the musical, he could only dribble and finish with his right. A true basketball jock could dribble left and lay the ball in with his eyes closed.

But kudos to Cheska Ortega (Gabriella Montez) and Sheila Francisco (Mrs. Darbus). Cheska didn't seem intimidated at all by Sam's star presence. Their scenes together were the best in the musical. And their rendition of "Breaking Free" elicited the most cheers and applause from the audience. Again, like in movies, most of the time it is the supporting character that steals the thunder from the rest. And in this particular play, it was Sheila Francisco who tickled the audience with her well-timed humor.

Overall, High School Musical was a fun ride. If only high schoolers who were as physically (un)imposing as Sam Concepcion could be jocks, be thespians, and ultimately, get the girl, life would have been a much sweeter ride.