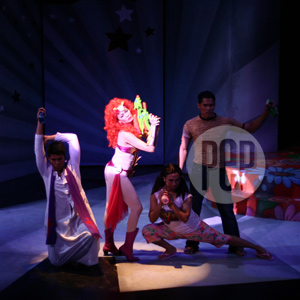 Zsa Zsa Zaturnnah goes through another transformation in the fifth run of Zsa Zsa Zaturnnah Ze Musikal, to be performed until July 1 at the Carlos P. Romulo Auditorium of the RCBC Plaza in Makati City. The red-haired, busty superhero created by Carlo Vergara is now played by spirited singer-comedienne K Brosas.

The show tells of the feats of Ada, a gay beauty salon owner who, with help from a mysterious stone, is able to transform into a superhuman warrior—plunking her in a short list of modern-day, homosexual superheroes. In 1992, Alpha Flight's Northstar was revealed to be homosexual, ending a long-standing editorial mandate that there would be no gay characters in Marvel comics.

Veteran actress Eula Valdez, who starred as Zsa Zsa Zaturnnah in earlier runs, will perform for the 3 p.m. and 8 p.m. shows on July 1. The show is directed by playwright Chris Millado.

K, who once played villain Divina Demonica to Angel Locsin's Darna, seems to have a knack for getting—and keeping—the audience's attention. Her offbeat humor, coupled with a mannish voice, draws a lot of notice. Also, despite the zany gags, she at times shows a peculiar susceptibility—consistent with her confused alter-ego Ada, played by stage director Tuxqs Rutaquio.

The Bitoy's Funniest Home Videos and Hokus Pokus mainstay churns out a surprisingly poignant performance in the scene where Zsa Zsa confronts her dad, who is brought back to life as a zombie. Itay Zombie, played by Jerald Naples, looks at Ada as a disappointment—the son who grew up to be a gay parlorista. At first, not recognizing each other, they exchange droll cracks. But like a bolt from the blue, the two remember their relationship and its troubles, setting the stage for Zsa Zsa and Ada's duet.

Written by musical director Vincent A. De Jesus, the all-original songs add dimension to the already colorful plot. This, perhaps, is K's strongest point in giving new life to the superhero. Some viewers claim that the lead singer for the band K and the Boxers renders a more heartfelt and unaffected version of the songs.