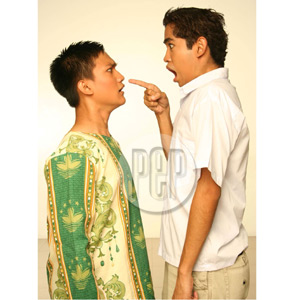 Pepe and Pepito are both intelligent young boys, of almost the same age and might even be mistaken for each other physically. Of course, one of them is destined to be a national hero and one is...well, one is hiding the national hero's statue in a storeroom.

Pepito is a Grade 6 student of Rizal Elementary School. He accidentally breaks the head of a statue of the young Jose Rizal, which the city mayor had given to the school in celebration of the Buwan ng Wika. He has a week to return the statue and when he mournfully goes to the storeroom to check on Rizal, he finds himself in Calamba, the hero's hometown, and surrounded by the Mercado sisters.

PETA's Batang Rizal takes the audience from the present to Dr. Jose Rizal's boyhood and then back again with Pepe [Rizal] in tow. The two boys experience life in each other's time zone in an adventure of a lifetime, discovering that patriotism and heroism can be found even in an ordinary child's heart.

This 40th Theater Season offering is written by Christine Bellen, directed by Edward Teraña and with music by Vince de Jesus and animation by Don Salubayba and the Anino Shadow Collective. Batang Rizal will open at the Tanghalang PETA-Phinma of the PETA Theater Center on July 20 and will run until August 26, with performances at 10:00 am and 3 pm.