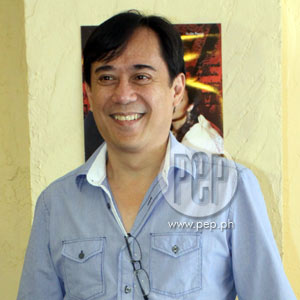 "The joy of directing is that you're getting your actors to flesh out the characters. They become real, more and more real," says Audie Gemora who also enjoys coaching pop singers Gian Magdangal and Mark Bautista. Gian and Mark alternately play Crisostomo Ibarra in Noli Me Tangere, which is being staged at the CCP until August 28.

On its opening night last August 5, Noli Me Tangere: The Musical's director Audie Gemora says the production earned a standing ovation. The veteran thespian said he felt relieved that the play is currently running at the Cultural Center of the Philippines. It will be staged until August 28, 2011.

He let out a sigh as he said, "Nakahinga na ako. I don't have to live under the shadow of the last staging. May sarili na siyang buhay."

To direct Noli Me Tangere, Audie Gemora revealed that he had to re-read and re-educate himself on Jose Rizal's classic novel.

The first staging of the Noli musical ran in 1995 with a libretto written by National Artist for Literature Bienvenido Lumbera and music by Ryan Cayabyab. Back then, Audie Gemora was in the production as well. He played the part of Rizal's protagonist Crisostomo Ibarra under the direction of Tanghalang Pilipino founder Felix "Nonon" Padilla.

This present production of the Noli honors the National Hero's 150th birth anniversary and at the same time celebrates Tanghalang Pilipino's silver season.

Having played lead in the previous production and now with an established producing, acting, and singing career, Audie made use of his experience when it came to directing the 2011 staging.

"Primarily I'm an actor so that's where I align myself—in storytelling."

What Audie did was "take away all the imagery, all the symbolisms that were in the past production" to come up with a simpler storyline. He focused on the acting and "fleshing out the characters" and in that way they become real. "Para people can identify," he adds.

Audie explains further that he worked with dramaturge Rody Vera to work on linking the scenes that turned out to be disconnected after removing the imagery and symbolism. Upon realizing that the Noli contained letters written by characters to each other, Audie and Rody used the novel's motif to act as a thread that would weave the scenes and acts together. He hints, "There's a lot of love-betrayal theme using letters."

What makes the Noli a comprehensive read, says Audie, is that it consists of many subplots embedded with metaphors and satire which were used as a means of sugarcoating Rizal's social commentaries on the government and the Church.

The difficulty thus of turning the novel into a musical was at hand. "So what we did, we just concentrated on the love story between Maria Clara and Ibarra, tapos may pumapangatlong priest [Padre Salvi] na gusto silang siraan dahil gusto niya si Maria Clara although hindi niya makuha.

In effect, the musical unfolds into a love story that concurrently touches on the social cancers that Rizal dealt with in his novel.

"When this was written I was reading a lot of essays about it na... kinagalit talaga ng Church ... Rizal was fighting for the rights of Filipinos...

"I'm just really hoping that it will find its voice in today's audience."

WORKING WITH GIAN AND MARK. When asked to name his favorite character, Audie is quick to answer, "Ibarra, siyempre, because I played him."

It gladdens him to see pop singers Gian Magdangal and Mark Bautista give Ibarra's role "a fresh attack."

The director who is also used to handling younger actors these days as he heads TV5's talents, shares, "Si Gian, natatawa siya... sabi niya, 'Man, it's so hard to be directed by someone who played the role already.'

"And so I would tell him, 'ito dapat nafi-feel ng artist, ng character mo.'"

SOCIETY'S CANCER. When he had to familiarize himself once again with the novel, Audie realized that the Noli indeed remains relevant today. "Lahat ng sakit na in-expose ni Rizal in his day is still very much present today, if not worse," he states.

For Audie, one of the cancers of society that Rizal tackled in his novel is "the theme, oppression."

"Everything that we fought for is still happening now....Filipinos still have to fight for their rights.

"At kung ma-realize ng mga kabataan, then they will not go by way of Ibarra. Si Ibarra kasi idealistic, tapos towards the end nawala na ang idealism niya.

These realizations, for Audie, state the need to restage the Noli on Rizal's sesquicentennial anniversary.

"He [Jose Rizal] still needs to be heard," he stresses.

So far, Audie is happy that he is getting his message across to his audience.

POWERHOUSE PRODUCTION. Noli Me Tangere: The Musical is a product of some of the best artists in the country.

"The language is already written, and beautifully written by our national artist Bien Lumbera, so hindi ko masyadong ginalaw yun kasi sacred yun e." Nonetheless Audie worked on switching around some scenes to come up with a different staging.

"I got to work with a fantastic choreographer. Si Agnes Locsin," he eagerly adds. "Everyone's telling me the staging is completely different. Parang I tried things na di pa nagawa."

Audie tried to come up with a "movement-based" musical that is integrated with the singing and acting of the cast. "So lahat gumagalaw at all times, walang time din na walang ginagawa ang tao."

He likewise mentions set designer Mio Infante whom he asked "to come up with a really fantastic set which is all just steps."

"I had a wonderful time blocking people, playing with the levels, up and down, back and forth.

Meanwhile, the production also takes pride in its musical adaptation by Ryan Cayabyab. Audie relayed how the first production's Act 1 recording was lost. Audie and company had to ask Mr. C, as he calls the Maestro, to redo Act 1.

Audie cannot say anything more about the music, just that "It's beautiful, beautiful."

FINDING FULFILLMENT. Audie finds fulfillment in coming up with an Filipino play.

"Whereas kung Broadway lang gagawin mo, you just take whatever you see abroad, minsan kopya pa nga, e. So you just pick up in the execution...

"Coming up with an original is far more satisfying."

Earlier this year, he was named Best Director by the same awarding body, for the psychological drama Equus, which also won the Outstanding Play award.