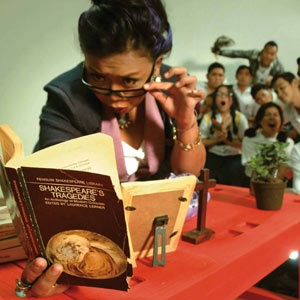 The character Ms. Lutgarda Martinez tries to teach William Shakespeare to a rowdy class.William will be staged at the PETA Theater Center in Quezon City from August 14 to September 25, 2011.

"If there's a word that strikes fear among high school students more than Calculus or History combined—it's Shakespeare.

"But what's in a name? For most students, William Shakespeare has become synonymous with long poetic dialogue, archaic language, confusing histories. Shakespeare has bored many a student to tears and made their noses bleed.

"Philippine Educational Theater Association (PETA) for its 44th Theater Season takes Shakespeare off the lofty pedestal and makes The Bard a "peer," or to borrow the term of the youth today, a "kabarkada."

"PETA has come up with an original play that will cure students' Shakes-fear and and turn the Bard into a Shakes-peer—Everyone's friend.

"Directed by the same woman behind the hit musical dramedy Care Divas, PETA Artistic Director Maribel Legarda, comes a daring play that will break down barriers between Shakespeare and Filipino students: William.

"William is set in a high school in Metro Manila, where five young students are forced to study Shakespeare by their terror class adviser, Ms. Lutgarda Martinez.

"In the process of studying, they not only realize the beauty of Shakespeare's works but also discover themselves through Shakespeare's characters. The class muse, Sofia, finds out what true beauty is through Romeo and Juliet; the bully, TJ, encounters humility and grace through Hamlet; the brainy OFW's daughter, Estella, learns forgiveness while the student council leader, Richard, learns self-acceptance through Merchant of Venice; and a timid lad, Erwin, finds his voice through Julius Caesar.

"These high school barkada soon realize that Shakespeare is not just a literary icon meant to torment their lives, but is also a friend and peer. From then on, they begin referring to Shakespeare by his first name, "William."

"Writen by Ron Capinding, William uses rap and hip-hop to introduce Shakespeare's immortal characters to young audiences. It also touches on themes of adolescence, parent's unconditional love and friendship. William promotes respect for teachers and classmates and advocates a love for reading and appreciating literature, Shakespeare or not.

Schedules may change without prior notice