Gantimpala Theater kicks off 30th season with "Florante at Laura" 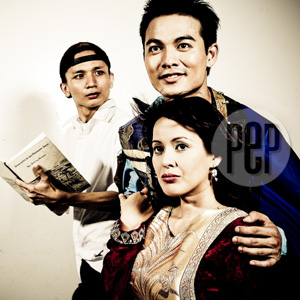 Michael King Urieta (background) is the narrator of the story of the Christian lovers Florante (Joel Molina) and Laura (Kimberly Diaz) in the Balagtas classic.

Gantimpala Theater kicks off its pearl year with Florante at Laura. Francisco Balagtas's awit soars to greater artistic heights as the 30-year old company presents it as a commanding komedya.

Tony Espejo, artistic director says, "My baby is now 30 years old. For three decades, the artists of Gantimpala Theater have selflessly given their precious time, talent and God-given skills in staging productions that touch the hearts and souls of our student audience, season after season. We aim to strive for artistic excellence and struggle to bring out the best that our plays deserve. Seriously, we must be doing something good for us to last all these years. It is something to be proud of. It is an achievement, and it feels good."

As Gantimpala Theater dramatizes this legendary awit into a komedya, expect its Actors Company to do the ditso (the style of the declaiming the verses, which generally follows a sing-song style); the mustra or aksyon (movements of the body and the hand, which serve to visualize the meaning of the words being declaimed); the marches (slow grand marches of the Christians and Moors); the pasa dobles (which are fast, double-step marches for individuals entering or leaving the scene); the paseo (for the tournament, which is a pass-in-review on all participants before the actual combat); the pingkian (where the Christians and the Moors argue and debate); the batalla (choreographed fighting); and the ehersito (the pass-in-review or training of soldiers, done before the attack on an enemy kingdom).

Continue reading below ↓
For tickets and other information, call the Gantimpala Theater Marketing Office at 899-5745 or 896-3503.
Read Next
Read More Stories About
Theater
Post a Comment
Featured
Latest Stories
Trending in Summit Media Network