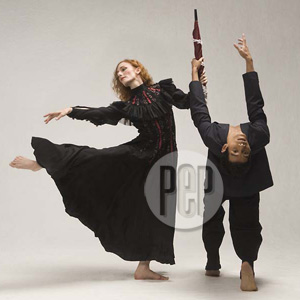 Rizal Revisited choreography by Alden Lugnasin, accompanied by Floy Quintos's libretto, create a dream-vision of the national hero's life through a dance interpretation of his literary masterpieces.

The dance opus begins with a young boy (Cyril Fallar) cramming for his book report on Jose Rizal. He rides the Metro Rail Transit a dream-like sequence, where the commuters render lines from Rizal's novels, Noli Me Tangere and El Filibusterismo, his Letter to the Women of Malolos, andhis famous poem Mi Ultimo Adios. The MRT transforms into the Bapor Tabo (ferryboat described in El Filibusterismo, which represents the Philippines) as Mi Ultimo Adios concludes.

The dance extravaganza ends with Rizal's exile to Dapitan, depicting the last moments of the hero's death by firing squad. All the characters in his novels appear, with old and young Filipinos solemnly viewing his body.

Double Takes, on the other hand, is inspired by a piece created by Geminal Casado, artistic director and choreographer of Karlsruhe Ballet of Germany. Casado interprets a whole set of Baroque music with the simultaneous performance of various dance genres. Contemporary choreography is done on stage while classical pieces are played in the orchestra pit.

The result of this choreographic feat is a dizzying and dynamic display of the Ballet Philippines' brawn and bravura, discipline and dedication to the dance arts.