Jett Pangan will be part of Repertory Philippines' Jekyll and Hyde 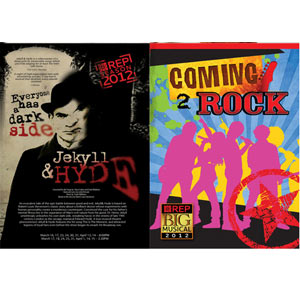 Repertory Philippines will offer Leading Ladies, Next Fall, Camp Rock: The Musical, as well as in Jekyll & Hyde in 2012.

"Good times and bum times, we've seen them all and my dear, we're still here."

What a true statement this is for the 45-year old Repertory Philippines as it celebrates its anniversary as well as 75th season on stage.

From performing to a crowd of 7 people a good 45 years ago to its present-day capacity of filling up OnStage Greenbelt 1 primarily and other theater stages, Repertory Philippines indeed has come a long way.

Its first play, Miss Julie (1967), only had 7 people watching it which included 3 paying customers. Coined from the Repertory Philippines official press release, they were "struggling to put up a professional theater company, and they had to beg, borrow, and steal most of what it needed for its productions."

Today, Repertory Philippines can proudly claim the title of the country's premiere English-speaking theater company set in a class of its own. What Bibot Amador and Baby Barredo started 45 years ago remains to this day and is transforming through the infusion of a new generation of dedicated thespians keeping the Rep vision alive.

To formally usher in the 2012 plays, Repertory Philippines rolled out an impressive press launch at Enderun College on majestic McKinley Hill, The Fort. Since many of the shows are still in the casting stages or in pre-production, many of the cast members haven't been finalized yet.

Associate artistic director Menchu Yuchengco-Yulo explains that existing Repertory Philippines cast and members filled in to preview to the press and theater friends teasers what to expect for 2012.

Two songs for the Audie Gemora directed Camp Rock: The Musical were previewed: "This Is Me" and "Don't Stop Believing." Based on the popular Disney movie of the same title, Repertory Philippines explains that their adaptation affords kids and tweens the opportunity to experience Camp Rock in a deeper way while the theme of working together to achieve results, similar to the movie, is echoed in the experience of putting on a stage show.

Repertory Philippines crafted their theatrical version in such a way that students all over the Philippines will be able to mount their own productions of it. According to them, this new licensing opportunity provides the youth with a gratifying introduction to the world of theater.

The highly intelligent Next Fall tackles a variety of themes, even hitting on many religious and philosophical concepts as the title and visuals suggest. Based on a Geoffrey Nauffts material, the preview of Next Fall showcased the morning-after-a-passionate-night dialogue between two gays.

The gay couple starts off by discussing their night of passion, when one of them, Luke, suddenly brings up God and what he thinks of him. The other one, Adam is perplexed and so the scene progresses into a debate, verging on the philosophical, but always staying on point with witty retorts. As it starts to paint the picture of modern romance spattered with hard questions on faith, commitment, and life, it is clear that Next Fall will zero in somehow on the transformational power of love.

After such a thought-provoking dialogue, it felt quite refreshing to suddenly hear some familiar names like Dorothy, Tin Man, Cowardly Lion, and Scarecrow. It was time for the preview of The Wizard of Oz through three songs. However, the Rep version does not feature any material from the famous MGM film of the same title and does not include songs from the movie too.

Instead, Rep neatly reinvented L. Frank Baum's classic masterpiece, teasing all of the audience with an impressive and very believable performance by the Wicked Witch of the West and allowing a new and younger generation of viewers to enjoy this theater favorite.

Next to be previewed was the cheeky Ken Ludwig creation Leading Ladies. It is going to be directed by Michael Williams and already shows promise of being culled the unique and quirky play of the 2012 Rep season.

The premise of Leading Ladies is, 'how far would you go for three million dollars?' For the two male leads, apparently they're willing to go the distance! Think of it this way: two sisters-one big fortune-sister who is alive is now seeking the lost children of her dead sister to make them her heirs-two actors down on their luck pretending to be said lost heirs-only to realize that lost heirs are supposed to be girls. This is certainly one play to watch for!

Lastly, the Menchu Yuchengo-Yulo directed play, Jekyll and Hyde, previewed two songs. Based on the stage play of Steve Cuden and Frank Wi but originally reworked from the Robert Louis Stevenson novel, Jekyll and Hyde is Rep's 2012 dark horse, literally.

It features Broadway hits "Jekyll and Hyde" and "This is The Moment" and will actually include The Dawn singer Jett Pangan in one of the title roles. Menchu reveals she hasn't finished casting yet and will just announce the final cast at a later point to create another splash for Jekyll and Hyde. As everyone knows, Jekyll and Hyde features the evocative tale of the epic battle between good and evil, existing in one person.