"Pilipinas Circa 1907" depicts power struggle during the American regime 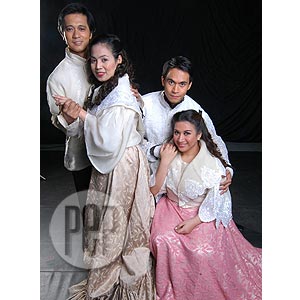 Miguel Castro and Lani Ligot (from left, standing) alternate with Arnold Reyes and Ana Guillen Feleo as Emilio and Leonor in the sarswela Pilipinas Circa 1907, which will be staged by Tanghalang Pilipino from August 10 to September 2, 2007.

This year marks the 100th anniversary of the first Philippine national elections held on July 30, 1907. In time for this historical event, Tanghalang Pilipino revives the landmark sarswela of Dr. Nicanor G. Tiongson for the theater company's 21st season opener.

Pilipinas Circa 1907 will run at the CCP Tanghalang Aurelio Tolentino from August 10 to September 2, 2007. The production, set in the period prior to the national elections in 1907, dramatizes the political conflict and family relations getting in the way of two pairs of star-crossed lovers when America was more in the heart.

This production caters to all ages and persuasions, but more specifically for music theater enthusiasts and students of Philippine history, literature, political science, and the humanities.

Pilipinas Circa 1907 shows the strife between the opposing forces of the Federalistas and the Nacionalistas during the time of the American regime. Don Pardo, a candidate of the Federalistas, is campaigning on a pro-American stand, advocating the assimilation of the islands into the American union of Federal States. On the other hand, Emilio, a poet and journalist, is a candidate of the Nacionalista Party that is seeking immediate autonomy from the Americans.