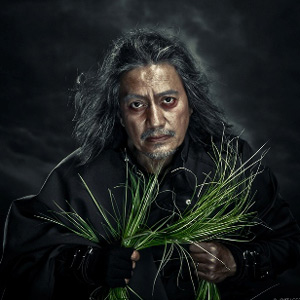 Teroy Guzman (in photo) is cast as the aging monarch in PETA's staging of Haring Lear, which will be staged from January 27 until March 4, 2012. National Artist for Literature Bienvenido Lumbera translated William Shakespeare's tragedy into Tagalog prose.

"William Shakespeare is regarded as the greatest global dramatist ever. His works has prompted so many adaptations and retellings and has been articulated in many different forms and languages. However, we Filipinos have never seen one of his greatest plays, King Lear, done in graceful liquid Tagalog prose--until now.

"Set in a post-nuclear world that is strangely contemporary and familiar, Shakespeare's King Lear receives a fitting, royal makeover, fashioned by a pool of Filipino theater giants.