Next Fall will be staged at Greenbelt 1 until February 5, 2012 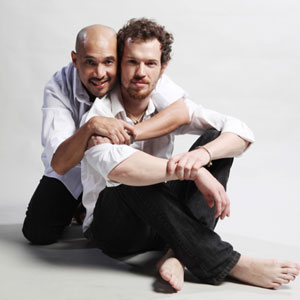 Next Fall will be staged at Onstage, Greenbelt 1, Makati City from January 13 to February 5, 2012. Topbilled by Bart Guingona (left) and David Bianco, this play is about a gay couple agonizing over differences in their religious faiths.

After producing more than 900 plays and musicals through 74
seasons, Repertory Philippines proudly ushers its 45th year this 2012 with its first production titled Next Fall.

Next Fall shall run from January 13 to February 5, 2012 with shows on Fridays and Saturdays at 8:00 p.m. and matinee shows on Saturdays and Sundays at 3:30 p.m. All performances are at Onstage, Greenbelt 1, Makati City.


Written by playwright Geoffrey Nauffts, Next Fall is a very moving
story of Luke and Adam, a gay couple agonizing over differences in their religious faiths. The play portrays the ups and downs of this unlikely couple's five-year relationship with sharp humor and unflinching honesty.

When an accident changes everything, Adam must turn to Luke's family and friends for support and answers.

Next Fall paints a beautiful and funny portrait of modern romance,
asking the hard questions about commitment and faith. But ultimately, simply, it is about the transformative power of love.

The play takes place between 2000 and 2005 in New York City. The
present narrative takes place in a hospital waiting room where Adam, Brandon, Holly and Luke's parents have gathered after he is hit by a runaway cab. Interspersed with these chronological scenes are flashback scenes showing how Luke and Adam met, fell in love and constructed a life together with the final flashback occurring the day before Luke's accident.

Luke is a devout born-again Christian, which creates tension in his
relationship with Adam and in his friendships with Brandon and Holly, and leads him to hide both his homosexuality and his relationship with Adam from his equally devout parents. In the present narrative in the hospital, Adam, Brandon, Holly and Luke's parents deal with the fallout from these conflicts and secrets, while also struggling to understand what it means to be faithful in the face of the immense unpredictability and fragility of human life.

Next Fall is a romantic comedy, a tragedy, a family drama, an
issue play, and a coming-of-age story. Whichever path you take into Next Fall--the notion of faith is central to the experience.

The powerhouse cast will feature Bart Guingona as Adam, a committed cynic, atheist and hypochondriac.

David Bianco will play the role of Luke, Adam's boyfriend, a born again Christian and aspiring actor. David hails from Michigan and this is his first foray in the local theatre scene.

Liesl Batucan will essay the role of Holly, Adam's fag hag best friend
and owner of the candle shop where both Adam and Luke work.

Niccolo Manahan plays Brandon, Luke's friend, a property manager.
Like Luke he is both gay and a born-again Christian.


Juno Henares plays Arlene, Luke's mother, a former wild child who
has since settled in to middle aged eccentricity.


Veteran actor / director Audie Gemora will direct the play. This is
Audie's third directorial job for Repertory Philippines (the first two were The Fantastiks and Equus). He was seen recently in The Sound of Music, Man of La Mancha, A Christmas Carol and Sweeney Todd where he won as Best Lead Actor in a Musical for the Philstage Gawad Buhay Awards.

For tickets, inquiries and other information, call Repertory
Philippines at Tel. No. 571-6926 or Tel. No. 571-4941 or email info@repertory.ph. Tickets are also available thru Ticketworld at 891-9999 or www.ticketworld.com.ph.

Next Fall is presented by special arrangement with Creative
Artists Agency.