PEP REVIEW: Next Fall is an enlightening play about a gay couple dealing with differences in faith 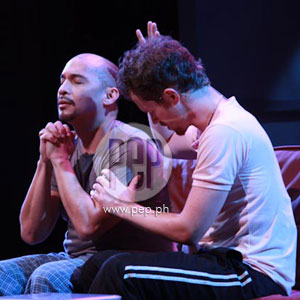 Luke (David Bianco, right) prays over Adam (Bart Guingona, left) who wants to believe in God but doesn't feel like he has enough reason to. This is a scene from Repertory Philippines' Next Fall, which is being staged

Adam (Bart Guingona) sneaks out and opens his MacBook. Luke (David Bianco) screams from the bedroom, "Are you checking that tumor website again?" Adam is paranoid about having a tumor. His hypochondria stems from his fear of having AIDS in his college days. Luke joins him on the sofa this is when they truly bare their soul to each other, a conversation neither of them will forget.

Adam admits, "It was horrible I remember thinking it was my punishment for being gay." Luke asks, "Punishment from whom?" Adam is the hopeless atheist, "Oh, I don't know... God? You don't have to believe in hell to walk around and feeling like you'll burn in it!" Luke comforts him, "You mentioned your soul the first night we met, you said it was fact. That's how I knew we were meant to be. You believe, Adam, I know you do. I remember that night at the rooftop. I know one day you'd see. Please? For me?"

Perhaps among all of the plays this season, Next Fall by Repertory Philippines is a must see for all (adult) audiences. It is being staged at Onstage, Greenbelt 1, Makati City until February 5, 2012.

The play won the John Gassner award from the Outer Critics circle for playwright Geoffrey Nauffts. The story deals with the conflicts that gay men have with their Catholic faith. Here in the Philippines, it's something that people don't necessarily talk about or judge either for or against a side in the religious issue. The play shows how people cope with their religious beliefs.

According to director Audie Gemora, Next Fall isn't about judgment but "love and how it transcends differences."

It is funny and thought provoking at the same time. The laughs don't come in zingers or one-liners every minute. Most of it is actually calm, introspective dialogue of their day-to-day lives. But how can anyone avoid humor and gaiety in the depiction of a gay couple?

Theater is acting in the purest form. This is where someone like Bart Guingona shines. There's no special effects or big production to hide from, no large musical number or even wild costumes. Without all of those elements, you're left with the performance of the cast and the story. It falls on them to allow viewers symphatize with their characters. The question is how well do the actors inhabit the characters they portray? Nuances in the voice, tone, and delivery are what people tend to focus on. And since the whole cast played each of their part exceedingly well, telling the story was quite easy.

Bart Guingona as Adam is a powerful presence on stage if only for his efficacy in playing the atheist boyfriend of Luke played by David Bianco. Luke is a Born Again Christian who shares his faith to his live in partner. Bart's tone of voice, quickness of delivery makes everything more natural and believable. His normal speaking voice at the presscon was entirely different. He is capable of delivering very long, monologue like lines without breathing, which makes it even funnier.

The story happens in just one day when Luke goes into a coma because of a car accident. Flashbacks of how he and Adam piece their life together a couple recurs throughout. Adam is forced to deal with Luke's conservative family in the hospital. Butch is the strong willed father who is in denial about the real relationship of his son. Played by Miguel Faustmann, his booming authoritative voice is perfect for the role. And he is the cause of the most tense scenes. There are moments, however, when Butch unintentionally shows his vulnerable side when he breaks down over his son's accident.

Another important character is Brandon played by Niccolo Manahan. He is Luke's best friend who's also in the closet. Adam seeks his help in understanding Luke's quirks. Manahan effectively portrays a straight guy who is unable to come to terms with his homosexual desires. Perhaps the raves for his performance may convince Manahan to take up theater full time. He divides his time working in advertising agency.

Director Audie Gemora is most popularly known as a judge in TV5's talent search, Talentadong Pinoy. He is also the Head of Talent5, the talent management and development division of the network. As a veteran director of Repertory Philippines and founder of Trumpets, he was able to assemble a cast that perfectly fit his vision for the play. His faith may have also been a reason for critics to question his intentions. Audie is very outspoken about his Born Again Christian beliefs.

After the press preview, Audie shared his insights: "In my walk as a Christian na kita ko na hindi ganun ka black and white ang buhay. There are a lot of gay people struggling. And the church doesn't know how to deal with it. And it's painful because I have a lot of friends who are going through this. When I saw this it was such an honest portrayal of someone who really loves God but just happens to be gay. That's all I was interested in being able to capture and give life to na walang judgment."

For tickets, inquiries and other information, call Repertory
Philippines at Tel. No. 571-6926 or Tel. No. 571-4941 or email info@repertory.ph. Tickets are also available thru Ticketworld at 891-9999 or www.ticketworld.com.ph.