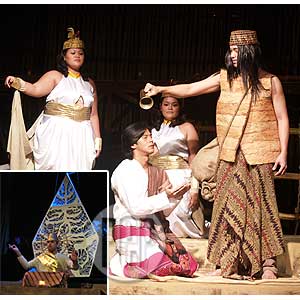 Jesus Christ (Romnick Sarmenta, kneeling) is baptized by John the Baptist in the presence of two angels in the play Pasyon ni Kristo. This Dulaang UP production infuses Asian elements such as the presence of God appearing in the form of Buddha (inset).

Recognizing that various religious faiths abound in the State University, the theater group Dulaang UP infuses a distinct Asian flavor to the Biblical story of Jesus Christ in its latest production, Pasyon ni Kristo.

PEP (Philippine Entertainment Portal) watched this Filipino version of the Wakefield mystery play, which was translated by Jon Lazam. Pasyon ni Kristo, directed by Tony Mabesa,opens the 32nd season of Dulaang UP. Director Mabesa said there was a conscious effort to integrate Asian influences into this centuries-old Biblical story.

The director's notes in the play's souvenir program state that they decided to use "generic Southeast Asian costumes and properties, bamboos in the setting and music associated with the East."

Taking the concept further, the play depicts God appearing as "Buddha." The image of Buddha in a Biblical play is quite jarring but the effort to give the play a universal appeal is admirable.

Providing musical accompaniment to Pasyon ni Kristo is a wayang kulit ensemble. The haunting and soulful strains of the gongs and other native instruments make for an interesting aural treat for the audience.

Romnick Sarmenta leads the cast of characters in the English and Tagalog version of this Wakefield mystery play. As Jesus Christ, he maintains an air of dignity befitting the Son of God. However, there are times when he becomes too conscious of projecting a picture-perfect image of himself.

In the scene where he was being tortured by the Roman soldiers, the former matinee idol kept fixing his long hair, distracting the audience from the ongoing action. Another, more jarring distraction was Romnick's tattoo on his left arm, which could easily have been covered up going onstage. Jesus Christ with a tattoo?

Dulaang UP's The Passion of Christ/Pasyon ni Kristo will be staged at the Wilfrido Ma. Guerrero Theater of the University of the Philippines-Diliman until Sunday, August 12.