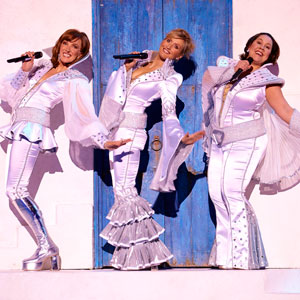 "It's such a lovely show...The ABBA songs, it's just so lively, colorful, glittery! It's glamorous! It's just everything! You will literally walk out of watching the show and just be so happy and energized after you've watched it. It just makes you feel so good about yourself." Rosie Heath who plays Ali in the Broadway smash hit, Mamma Mia!, attests to the wonderful time Filipinos will have when they come see the show. The 12-year-old production from W

The attractive, doe-eyed Sara Poyzer who plays the lead role in the international hit musical, Mamma Mia!, is certain that the Swedish pop act of the '70s is key to the success of the show.

And I just think that ... and I say that from the heart, I'm really not tired of the songs yet."

Sara, who portrays the feisty and lovable Donna in Mamma Mia! mentions that she actually sings "The Winner Takes It All" every night to husband Richard Standing who stars as Sam Carmichael in the same production.

"I think it's all about the songs," Sara emphasizes. "I think that Catherine Johnson wrote a fantastic script that tied these songs together so beautifully."

The global fever that Broadway show Mamma Mia! is, has finally reached Manila and is all set to captivate and provide their Filipino audience with an unforgettable theatric experience.

While Mamma Mia! producer Judy Craymer saw the "theatrical potential" of ABBA's songs--"Dancing Queen," "I Have a Dream," "SOS," "Gimme! Gimme! Gimme!," "Money, Money, Money," "Mamma Mia!," etc--at the outset, she knew that providing the audience with an equally enthralling story was needed. Plot is crucial and like in most musicals, the storyline is the heart of the show.

Playwright Catherine Johnson was able to draw much drama and emotion from ABBA's singles which were youthful and naïve in the early '70s and matured by the time the group saw through the '80s. This gave Catherine the idea of featuring two generations of women because ABBA's songs are also sung by two women, Agnetha Faltskog and Anni-Frid Lyngstad.

Thus Mamma Mia! tells of an endearing, hilarious, and suspense-filled story of Donna Sheridan and her daughter Sophie (played by Charlotte Wakefield) who is about to get married on an island in Greece. The predicament comes in when Sophie decides to find her biological father who she dreams of walking her down the aisle. When Sophie invites her mother's past three lovers, the plot becomes exciting as Donna's life suddenly becomes topsy-turvy.

Of course, the film version of Mamma Mia! that starred Merryl Streep, Amanda Seyfried, Pierce Brosnan, Colin Firth, and Stellan Skarsgard in 2008 familiarized the musical to a global audience. While the film was undeniably successful, the cast of the musical is undaunted.

Sara says, "I think the film's fantastic but what's missing is a live show!" The thespian goes on to mention that nothing comes close to the real experience of seeing and hearing the songs and the story come to life before one's eyes.

"I'm not saying necessarily that the actors are better, I mean, they got Merryl Streep in it!

"But there's something about having a live show, about the band striking off those numbers..."