PEP REVIEW: Mamma Mia! in Manila--it's not a dream 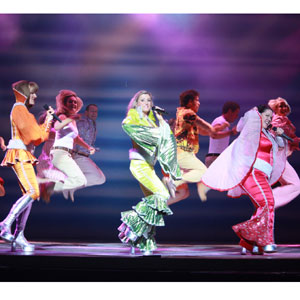 Mamma Mia! is being staged at the Cultural Center of the Philippines until February 19, 2012. Apart from the ultimate ABBA repertoire, what makes Mamma Mia! a charming musical is its story of a mother and a daughter undergoing a pre-wedding drama. The bride-to be, Sophie, is in search for her real father to have him walk her down the aisle. When she invites the three possible men to come to her wedding, Donna, her mother,

When the curtain rises, "I Have a Dream" fills the theatre hall. One finds himself singing, if not out loud, at least in his head. The scene opens with the golden-haired Sophie, her wistful moment captured by the lyrics, "If you see the wonder of a fairy tale / I'll cross the stream / I have a dream." Mamma Mia! unfolds, from here, into an endearing musical that tells of Sophie and Donna's story entwined with songs from the '70s and '80s by the Swedish pop act, ABBA.

One wonders of indeed the songs are or the story itself is responsible for the wonderful spectacle that Mamma Mia! is. For one thing, that ABBA's hit singles--"Dancing Queen" at that--came before the script is what makes this show unique. Coupled with a realistic plot narrating a pre-wedding riot where the most hilarious and moving characters figure, one realizes that the musical is not altogether extraordinary but rather, relatable. The singing and swaying to "Honey Honey," "S.O.S.," "Gimme! Gimme! Gimme!" or "Money Money Money," creates that powerful connection between the audience and the musical. If anything, ABBA's songs are infectious, which clearly intensifies the experience for the audience.

The plot that Mamma Mia! recounts is as well, a familiar one to the Filipino audience who loves their drama. The story of Sophie searching for her father, Donna being confronted by her past lovers, the mother and daughter's highly emotional phase prior to the daughter being wed--all these greatly appeal to the spectators, especially to the ladies.

What is in store for the men, meanwhile, is the comedy in Mamma Mia! made effective by the characters of Tanya and Rosie, the two other members of Donna's '70s girl band, Donna and the Dynamos. To top off the excitement are the characters of the "three possible" fathers--Sam, Harry, and Bill--whose sudden presence in the lives of Sophie and Donna would keep the audience guessing as to who the father of Sophie is.

While the minimalist but convincing set makes the wedding (supposedly set in Greece) conceivable in mind, each song-and-dance performance is emphatic, moving, more so entertaining. It does not turn into an ABBA concert because the songs are beautifully woven into the plot, making sense in the scenes they are put in. The lights of the production are commendable as well, specifically when they emphasize the time of day in Greece when a particular scene is happening, be it morning, dusk, sunset, or the evening.

The stage becomes a spectacular sight especially when the whole cast joins in one solid number especially by the time the scenes reach for the conclusion. At the end of the musical, audience members get up on their feet, dancing to the encore of "Dancing Queen," what else? It is pure elation. And that feel-good vibe stays until your last song syndrome ("You can dance, you can dance, having the time of your life") wears off, perhaps, in a week's time.

Mamma Mia! is being staged at the Cultural Center of the Philippines until February 19, 2012.