PEP REVIEW: Love, Loss and What I Wore is for women and anyone who has ever loved women for who they are 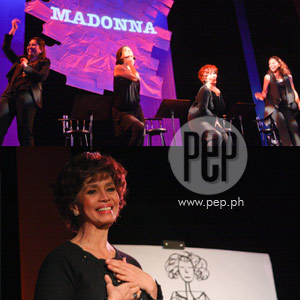 (L-R) Cathy Azanza Dy, Liza Infante Robinson, Jay Valencia-Glorioso and Menchu Lauchengco Yulo do their best Madonna impression in Love, Loss and What I Wore. (Bottom frame) Jay also did a live illustration during the play.

Each of the five women on stage delivers lines one after the other. Who knew that the mall dressing room could be such a place of distress? Their lines come in such rapid-fire succession that it makes the delivery even more comical.

(Bituin Escalante): Is there something wrong with the lighting in here?
(Cathy Azanza-Dy): Is this mirror like distorted?
(Menchu Launchengco Yulo): I can't wear anything without sleeves. (Jay Valencia-Glorioso): I can't wear anything low cut.
(Liza Infante-Robinson): My arms! What happened to my arms! (Cathy): My butt is falling.
(Liza): Is my butt falling?
(Cathy): Oh my God my butt fell!
Altogether in unison: Tell me the truth!

This hilarious scene is from Love Loss and What I Wore, produced by Ria Pangilinan and co directed by Michael Williams and Cathy Azanza-Dy. Audiences were both touched and amused at the Carlos P. Romulo auditorium of the RCBC Plaza last January 20-22, 2012. Watch out for other play dates soon. Clothes, their influences, what they mean to us at certain points in our lives is what it's about. Color, texture how they feel on the skin, even the experience of buying bras and undergarment can signal the transformation of an adolescent to womanhood.

The power of the words doesn't come from the mind of one playwright but from the real lives and experiences of real women. Love Loss and What I Wore is a play that sounds like real conversations from real people because that's what they are. It is based on a book written by Ilene Beckerman. Playwright Nora and Delia Ephron thought of adding experiences of other women for the stage version. Nora Ephron is famous for her successful screenplays Sleepless In Seattle, When Harry Met Sally, and You've Got Mail.

The play itself has evolved from the book to stage. Tyne Daly one of the original performers added the character Gingy during it's run in New York. Daly became famous for her TV character Mary Beth Lacey in Cagney and Lacey. Later on she was cast in Judging Amy, she has won a total of six Emmy's.

Classical vocalist Jay Valencia-Glorioso plays the role of Gingy. Hers is the character that is able to share the whole range from her childhood, her relationships and married life. Jay is a veteran of the stage and is a regular artist at Repertory Philippines since 1993. Her sister Sonya Valencia has also had some recent onscreen success as part of the cast in Niño. Jay easily shifted from age ranges making it believable that she was 8 years old and later on a middle aged woman.

More than any other character, illustrations are illuminated during Gingy's monologue, describing the clothes that were important to her and the one's she liked on her mom. Unique to this play is a live demonstration of how to draw woman's clothes. Gingy has that inner wisdom that is derived from experience. Audiences will get to see that 'change' slowly when she grows up and hears the difference in the dialogue.

This is the second run of Love, Loss.. since last year. The cast is the same except for Project Runway Philippines host Teresa Herrera who is replaced by Liza Infante-Robinson. Project Runway Philippines Season 3 will be airing in ETC channel this March 2012. Liza has that frayed, sing song voice that captures the frailty of her character. Bituin Escalante shines in her three separate voices: Holly, Mary and Nora. She ranges from a ditzy blonde to a Latina gang member at a drop of a line.

Menchu Lauchengco-Yulo plays Annie, Stephanie and Geralyn. She also usually voices the stern mother figures off the roles of Gingy. She has a strong articulate voice that cuts through confusion. She can be authoritative when called for as in the mother role. Menchu also gives Geralyn the stable, poised and womanly voice in spite of having difficulties with breast cancer. Each character is someone we can identify with, if not reminds us of someone dear to us.

Love, Loss and What I Wore is for women and anyone who has ever loved women for who they are.