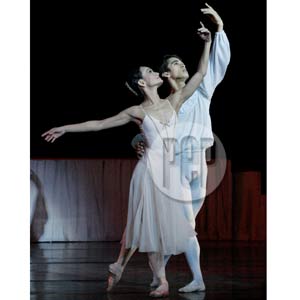 Opening on Friday, August 24, the concert will feature new choreographies by People's Artist of Russia Sergey Vikulov, Paris-based Ernest Mandap, and respected Filipino dance mentor Tony Fabella, as well as restaging of classical favorites that have been the hallmark of Ballet Manila performances.

Set during the fabled "white nights" when the sun never sets, Sergey Vikulov's "Night" features the haunting music of Sibelius in the unfolding of an ominous chance encounter between a Dreamer, a Stranger, a Girl and her Lover.

"I am very happy to be working once again with Sergey on a new ballet," says Lisa, who is also Ballet Manila's artistic director and principal. "He has done so many works for the company and knows each dancer so well." She adds that Sergey Vikulov is somehow an "artistic godfather" to BM, having been one of Lisa's mentors during her early years with the Kirov Ballet. He is also married to Lisa's beloved teacher, Tatiana Udalenkova, who molded her as a ballerina at the formidable Vaganova Choreographic Institute in St. Petersburg, Russia.

Loosely based on Dostoevsky's White Nights, the Vikulov choreography captures the distinctively melancholic, deeply insightful and technically demanding spirit of the modern Russian masters of dance. The prima ballerina is confident that the piece will challenge and push to the hilt the proficiency of Ballet Manila, which prides itself in its unmodified training in the Vaganova method.

Ernest Mandap, on the other hand, is a dynamic young choreographer who will offer two new works: the world premiere of "Mis Amores" and the Philippine premiere of "Reve." He also created "El Sol" for last year's Halo-Halo concert. "I am very excited to be able to do a tango in balletic form onstage," Lisa gushes over "Mis Amores," pointing out that it is the first time she will be able to do so in her 23-year career.

Tony Fabella's "Dancing to Czerny" is a certified a finale piece that follows the timeless appeal and success of his earlier creation, "Dancing to Verdi," which has become a Ballet Manila staple since it was created for the company in 1995. Choreographed on the strengths of each company member, as well as their impressive corps de ballet work as a group, one can expect an opulent audience rouser that will keep them clamoring for more!

Tickets are available at popular prices, with special discounts for students and group reservations.