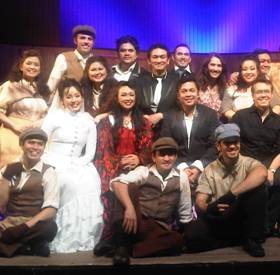 Something magical is happening over at Greenbelt 1 in Makati, and that magic is called Jekyll & Hyde.

Jekyll & Hyde is a musical play that Repertory Philippines adapted for stage here in the Philippines, from the Broadway original that ran for 1,543 performances from 1997 to 2001, enough for it to be called a smash-hit.

What makes the Repertory Philippines's version of Jekyll & Hyde magical is the exceptional direction by Menchu Lauchengco-Yulo.

PEP.ph was present during the press preview of the musical play last Thursday, March 15, at Onstage, Greenbelt 1, and what we saw exceeded our expectations.

For one, the local Jekyll & Hyde is a lot different from the Broadway original. In an interview, director Lauchengco-Yulo proudly admitted that she made big changes to the source material.

One of them is the addition of an interactive chorus. In the original, the chorus sings behind the curtains, while in this version, the chorus stands on several risers set towards the back of the stage.

This innovation is a genius idea because the new chorus gives the play the presence and atmosphere that's enough to easily hold the viewers rapt in fascination.

It also helps that the chorus is composed of experienced stage actors, whose talents are at the level of play's lead actors.

Jett, the lead singer of The Dawn, started appearing in musicals in 2002, so his performance in Jekyll & Hyde was as good as expected. The role looked tailored for him, and he had no trouble performing the musical's hardest songs.

In the song "Confrontation," Jett has to shift between the characters Jekyll and Hyde several times by altering his voice and posture, and he does it with no effort.

Kalila Aguilos and Cris Villonco play the women in Jekyll's life. Kalila is perfect as Lucy Harris, and her best number is "Someone Like You," where she evokes enough longing to make the viewers shed real tears.

Seasoned theater actress Cris Villonco is lovely as Emma Crew. She lights up the stage, and her singing voice is as pretty as how she looks. It's hard to pick her best song, because she shines in all of them.

Jekyll & Hyde is adapted from the classical novella Strange Case of Dr Jekyll and Mr Hyde, which Robert Louis Stevenson penned in 1886. It tells of a scientist named Jekyll who, in the quest to separate evil from the good in mankind, drank a potion that transformed him into an evil entity named Mr Hyde.