PEP REVIEW: Thy Womb is a lyrical ode to Tawi-Tawi 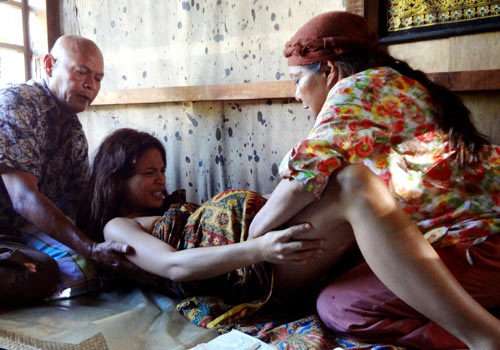 Thy Womb seemed to have Mother Nature included in its production payroll as the sun, the rain, a rainbow, a butanding (whale shark) all appear or disappear as if on cue from the film’s director, Brillante Ma. Mendoza.


Call it divine intervention, if you will, because these incidents allowed Direk Brillante to make full use of Tawi-Tawi’s picture-perfect nature shots to convey the film’s unsentimental approach to the ordinariness of extraordinary situations.


Nora Aunor, Bembol Roco and Lovi Poe bring life to the characters who are thrust into a complex situation as they navigate the intricacies of unconditional love.


Panoramic vistas of the turquoise blue sea in the opening sequences will leave a lasting impression upon viewers.


There are aerial shots of the houses built on stilts and breathtaking underwater shots of a huge butanding.


Scenes of a floating market may give the impression that these were shot in Thailand but the setting is actually in Sitangkai. This remote fishing village in Tawi-Tawi is known as the "Venice of the Philippines" due to the predominance of boats as transportation.


Vibrant hues are used to the hilt in a Muslim wedding scene, which also features a multitude of colorful vintas.


These stunning visuals make Thy Womb a lyrical ode to Tawi-Tawi.

Thy Womb is included in the 2012 Metro Manila Film Festival and is the only movie among the eight official entries to be released internationally prior to its local screening. Thy Womb was in competition for the 69th Venice International Film Festival.

Nora Aunor plays Shaleha, a Badjao midwife who is unable to bear a child for her husband Bangas-An, played by Bembol Roco. Shaleha is unwavering in her quest to find a suitable “second wife” for her husband, specifically one who would bear him a child. Lovi Poe as Mersila is the young woman who agrees to the set-up—a practice that is accepted in Badjao culture.

Written by Henry Burgos, Thy Womb is the only non-mainstream film included in this year’s MMFF.

It would be best for audiences to keep an open mind when watching Thy Womb.

There are no dramatic confrontation scenes between the wife and the would-be “other woman”. There are sporadic acts of violence in this otherwise tranquil place. The process of acquiring a new wife is business-like as negotiations between the bride and groom’s parties are simple and straightforward.

Thy Womb challenges viewers to drop—for at least 90 minutes—their long-held beliefs, both personal and cultural.

It is an eye-opener about life in the southernmost part of Mindanao as it presents little-known customs, rituals and day-to-day realities of Tawi-Tawi’s seaside community.


The film’s unflinching authenticity is impressive. The genuine real-time birth scene, the actual beheading of a cow, the six languages spoken by various characters throughout the movie—all speak of the effort and attention to detail put in by the entire cast and crew.

According to a linguist invited to the film’s screening in Davao City, languages spoken in Thy Womb include Tagalog, mostly uttered by the main stars Nora Aunor, Bembol Roco, Lovi Poe and Mercedes Cabral; English, Arabic (for the Muslim prayers and greetings), Tausug (spoken by Mersila’s family), Central Sinama and Southern Sinama spoken by the children, vendors and extras in the background.

As Nora Aunor’s comeback movie, Thy Womb is a fitting vehicle to display the Superstar’s acting prowess on the big screen. Her piercing melancholic eyes convey more emotion than words ever could.

Trapped between his need to have a child of his own and the rules of the betrothal arrangement, Bembol Roco’s performance effectively arouses both sympathy and resentment.

Lovi Poe’s beguiling innocence beneath her cold practicality is convincing.

In one fell swoop, Mendoza weaves the personal (one’s notion of selfless love, joy, sadness,) with the cultural (how one’s actions, choices, thoughts are dictated by the society one is in) and the national (Tawi-Tawi’s socio-political setting). His sweeping execution is subtle yet emotions are felt intensely and particular beliefs are known without being preached.

If you are open to having your view of Mindanao challenged, if you are up to the idea of watching a movie that puts you out of your comfort zone, if you are willing to question your own judgments and preconceived notions—this film is a must-see.

If you want to witness Nora Aunor’s long-anticipated comeback on the big screen, this movie is worth the wait.

Thy Womb will move you with its heartbreaking ending and the sensation, not just the memory, lingers long after you’ve left the theater.


(CLICK HERE to learn more about Thy Womb through PEP.ph's microsite on the Metro Manila Film Festival)