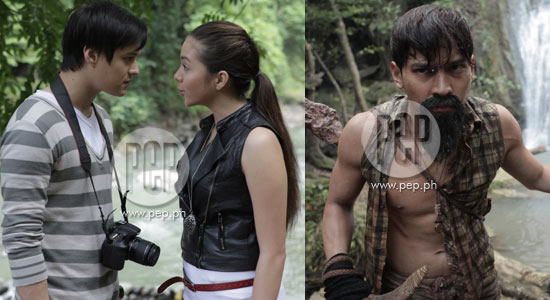 Lawrence Fajardo's The Strangers works because of its twist. The film has countless moments that do not make sense, at least until the twist comes along.

This twist is introduced halfway into the film, rebooting what the viewer knows about the characters so far.

Among film genres, horror is considered the hardest to do. It is difficult to terrify audiences. Fear comes from the unfamiliar and the unexpected, and so any director working on a horror flick must always reinvent the wheel.

The twist is one such way. It is, in fact, one of the most utilized techniques to freshen up a horror film. Made popular (but not invented) by director M. Night Shyamalan in the late '90s through the film The Sixth Sense, it is now one of the most-overused elements in modern horror.

Sometimes the twist works (The Others, Oldboy), and sometimes it doesn't (Guni-Guni, Amorosa: The Revenge). The twist in The Strangers is really quite clever.

It makes a lot of sense, and explains away the eerie events and little clues that come before.

Its significance in the film, however, is so large that revealing it will take away any enjoyment viewers will have. It is the big spoiler, and this review should be spoiler-free.

Instead, let us divide the movie like this: pre-twist, post-twist.

Post-twist is infinitely better than pre-twist. All hell breaks loose in the second half, and this is where all the action is.

The pre-twist, sadly, cannot match the post-twist's exuberant scale. In the first half, everything feels like a prelude, a setup of greater things to come.

The Strangers tells the story of a family driving through a province rumored to be rampant with aswang. When the van breaks down in the middle of the road, they have to find ways to escape before the night comes.

The story chugs along crudely because the characters are highly unlikable. Twin siblings Max (Enrique Gil) and Patricia (Julia Montes) do nothing but bicker and fight. Their father Roy (Johnny Revilla) has a hot temper. The mother, Evelyn (Cherry Pie Picache), seems to be neglectful of her children, letting them walk away even though danger is already present.

Thankfully, there's also Paloma (Janice de Belen), the yaya or caretaker of both Max and Patricia. Janice's Paloma is the movie's comic relief. Her character exists to lighten the film's dark setting.

Janice hits all the right notes here, and her short flirting scene with the driver (Nico Antonio) is downright hilarious.

2012 for Janice de Belen is a good movie year. Before this MMFF entry, she already starred in four movies: as a tough-willed woman in Jose Javier Reyes's Mga Mumunting Lihim, a suffering single mother in The Healing, a brave monster-fighting mom in Tiktik: The Aswang Chronicles, and a murderous psychopath in Pridyider. She aced each one.

But Janice is not in The Strangers' top billing. Top credits are given instead to four of ABS-CBN’s most popular young stars: Enrique Gil, Julia Montes, JM de Guzman, and Enchong Dee.

Of the four, Enrique and Julia have the most complicated characters. They do acquit themselves in the movie's second half, but the two cannot quite show the complexity of their characters before the twist comes in. In some scenes, Julia just looks bored.

JM de Guzman plays a barrio villager who befriends Patricia. He does fairly well, although you'd wish he had more exposure.

Enchong Dee is the best of the four. He plays a mysterious character who's supposed to hunt monsters. He may not be the focus of the movie, but he gives a convincing performance nonetheless. It is interesting to note Enchong’s transformation in this movie: he sports a beard and looks like a taong grasa living in a muddy forest.

Much of the plot of The Strangers is wrapped in secrecy. Everything hinges on a twist that's quite clever, but ultimately limits the movie from pursuing a better way to tell its story.

Director Fajardo could have chosen to nix the twist in favor of focusing on one plot point, preferably that of Enchong Dee's character. Maybe this needs a sequel?