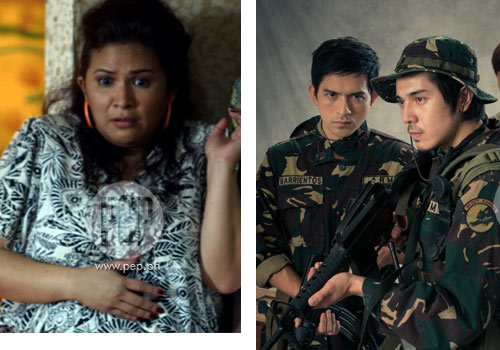 Since 2005, every edition of the film festival has had the horror anthology. It is a welcome diversion, both for audiences and filmmakers: SRR gives moviegoers an option away from the usual drama, comedy, and fantasy fare that are always present in MMFF, and the short format gives directors a chance to experiment.

This year, Chito Roño was chosen to direct all three segments in Shake, Rattle & Roll 14. For the first time in SRR history, only one director helmed the three horror stories. Perhaps Chito Roño was the right choice for this feat. Aside from having several awards under his belt, he can be lauded for breaking several genre taboos in the 2012 box-office hit The Healing.

(CLICK HERE to read PEP's review on The Healing)

The first segment is "Pamana," written by Ricky Lee.

It tells the story of four cousins who receive news of an inheritance from their deceased uncle, a famous horror writer for comic books. Amidst the group's bickering, the comics writer's creations come to life to test them.

The second segment is "Lost Command," written by Rody Vera.

It is about a battalion of soldiers exploring an unknown forest for a secret operation.

The last segment is "Unwanted," written by Roy Iglesias.

It tells the story of the couple Hank and Kate, who get trapped in a mall after it collapses due to mysterious causes. Along the way, they meet several other survivors who help them solve the mystery.

Of the three, "Pamana" is the most solid.

It is brilliantly-executed, and written with references to Filipino horror culture and history, such as the horror comics and the classic horror films. The ensemble cast is also excellent, with Herbert Bautista, Arlene Muhlach, and Janice de Belen leading the fray.

The story may be unoriginal (horror fans may recall the 2004 South Korean horror film R-Point), but the sharp production values and the strong performances from its predominantly all-male cast raise its quality.

Leading the troop is the always-reliable Dennis Trillo, showing enough toughness in a fear-filled situation and depicting perfectly how a soldier should be.

"Unwanted" is the weakest of the three. The grandness of the whole production—there are spaceships and large catastrophes—does not fit the short format.

Lead stars Vhong Navarro and Lovi Poe also confuse with their widely contrasting performances. Vhong infuses his Hank with a comedic vibe, while Lovi creates Kate with a far too serious demeanor.

The even less palatable part of this episode can be found in the ragtag band of supporting characters, none of whom is established well, so that in the end the viewer feels like they only exist to be eaten up by the monsters. A few of them need acting classes, too.


All in all, Shake, Rattle & Roll 14 is a mixed bag. But moviegers should still see it for "Pamana," which is worth the price of the entire ticket.