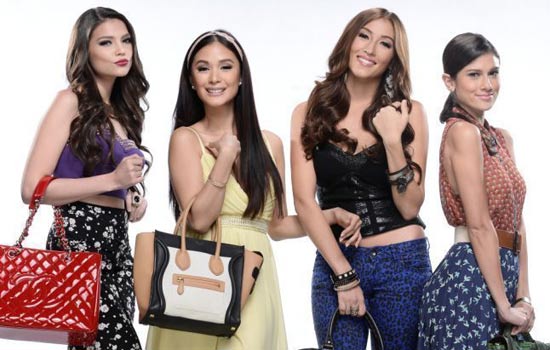 What I know about GMA Films’s Sosy Problems is that it is supposed to sarcastically portray the lavish and inconsequential lifestyle of the “nouveau rich,” or more un-popularly known as the “coños.”

This group of people are characterized by their materialistic ways, vanity, and annoying improper usage of English and Filipino (e.g. make + luto/tulog/tusok).

While Andoy Ranay’s film succeeds in giving clear-cut characters that walk, talk, move, and breathe like the so-called “super duper upper class,” Sosy Problems seems to forget that it’s a parody— that it’s supposed to poke fun at the frivolities of the coños, comically expose their nonsensical everyday dramas, and perhaps redeem them at the end of the film.

What it does instead is indulge the glamour —which, anyway, is the only commercial value of the film particularly for fashionistas— and drown out the heart of the story.

It makes sense to put together four showbiz “It” girls— Heart Evangelista, Rhian Ramos, Solenn Heussaff, and Bianca King— to play rich, spoiled brats, who have no better goal in life than to sustain their social status and flaunt their branded wardrobe.

In fact, all four of them looked stunning in each scene, even when they were role-playing, perfectly, their annoying ditzy characters.

Although the casting was not amiss because the four actresses looked the part of the chic characters, the problem with Sosy Problems is that the plot just neglected the film’s satirical motives.

In a parody, it's expected that the main actor should exaggerate his character’s flaws and even ridicule his own flaws. This is where Sosy Problems’ actresses fail.

Instead of mocking the lives of coños, the actresses become attached to their characters to the point where they make it seem that being an ignoramus and an extravagant soul is something good and something the audience should look up to.

This defeats the purpose of the film which, we suppose, should be to expose what's wrong with the way these people live their lives.

The only actress who probably gets the sarcasm is Rhian Ramos, who plays the self-centered and spoiled Lizzie Consunji, the daughter of a wealthy hotelier.

Rhian portrays Lizzie as this unbearably selfish and vain person whom the audience grows to hate, but eventually loves as the character learns her lesson towards the end of the film. Rhian is able to make her audience appreciate the change in Lizzie’s character.

It would be worth mentioning that Lizzie’s story is the easiest to empathize with and it could have been made stronger if Sosy Problems had focused on just one main character.

Instead, it ambitiously tries to create a collage of problems through four attention-seeking characters when it could have been the “problems” of just one person.

The supporting cast members of Sosy Problems were ineffectively utilized in the film. There’s Agot Isidro, who plays Heart’s character’s mother, and Mylene Dizon, who portrays the evil new owner of the polo club where the “Sosy” girls hang out.

For two seasoned and accomplished actresses, both Agot and Mylene displayed disappointing over-the-top acting. Apparently, this may be a case of misguided direction.

Certainly, this Metro Manila Film Festival entry has high production values. It succeeds in projecting a glitzy, beautiful world of fab clothes and succeeds in giving the audience good visuals on the big screen. If only the script had some substance, at least.