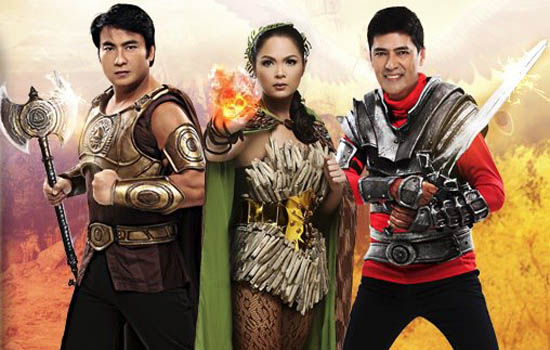 And for this year’s MMFF, Vic, together with his Enteng Kabisote “dabarkads,” reunite with Senator Ramon “Bong” Revilla, Jr. and Sam Pinto for the sequel of 2010’s Si Agimat at si Enteng Kabisote.

There’s really not much to expect from this year’s Si Agimat, Si Enteng Kabisote, At Si AKO.

Except for the introduction of Judy Ann Santos who plays AKO (short for Angelina Kalinisan Orteza), John “Sweet” Lapuz as Che, Yassi Pressman as Sol, and Ryzza Mae Dizon as Chichay, this latest Enteng Kabisote installment has the same old, family-oriented-but-predictable style of comedy, garnished with generous amounts of CGI (computer-generated imaging) and special effects, which the past Enteng Kabisote / Okay Ka Fairy Ko films were already also known for.

The film starts with Agimat (Bong) saving Samara (Sam) and her Amuleto Kingdom friends after they are captured by a tribe with cannibalistic tendencies.

Afterwards, Agimat proposes to Samara. They get married and decide to spend their honeymoon living as normal humans in Enteng’s world.

Enter environmental group leader AKO or Angelina Kalinisan Orteza (Judy Ann) who is immediately smitten by Enteng, and later on, by Agimat.

Unmindful that these guys are married, Angelina keeps turning up in places and situations where Enteng and Agimat find themselves in, and she keeps getting into “group hugs” with them.

Angelina admits she “admires, idolizes, and adores” both Agimat and Enteng and is addicted to doing group hugs with them.

Naturally, Enteng’s wife Faye (Gwen Zamora) and Agimat’s Samara do not like what Angelina is doing.

A series of comedic situations, a small-scale evil alien invasion, a light dramatic confrontation scene, and a number of celeb cameos later, the movie ends with the good guys triumphant over the villains, everything’s settled and resolved, and the lead characters get what they want.

It's the same story.

This year’s CGI work and special effects show little improvement from the past Enteng films. (Yes, it’s considered an Enteng Kabisote movie even with Agimat in it. Six box-office Enteng Kabisote films say so).

And just like its predecessors, this MMFF entry from M-Zet Productions and partners (OctoArts Films, Imus Productions, APT Entertainment, and GMA Films) tries it’s best to sell clean and wholesome fun while delivering a positive message.

Although the movie is rated G for General Patronage, there are some short scenes that border on a PG or Parental Guidance-rating.

One example is the honeymoon scene of partners Enteng and Faye, and Agimat and Samara.

After the two couples enter their respective tents, their silhouettes, as seen from outside their tents, suggest they're both going at it.

Adding to the suggestive theme are Jose (Jose Manalo), Bogart (Wally Bayola), and some Amuleto tribesmen doing the “Hala-Bira” Ati-Atihan dance and cheer.

This is actually a remake of a scene from the 1989 comedy Starzan: Shouting Star of the Jungle starring Vic’s real-life best friend, Joey de Leon.

Starzan and its two sequels—that same year’s Starzan II: The Coming of Star Son and Starzan III: The Jungle Triangle in 1990)—were huge hits, mainly because of their off-colored jokes or what local tabloid writers at the time referred to as “toilet-humor.”

And despite Si Agimat, Si Enteng Kabisote At Si AKO’s positive message of caring for the environment, it has a conflicted presentation of values.

One example would be Angelina flirting with the already-married Enteng and Agimat.

While she promotes caring for Mother Nature, Angelina also sends the wrong message to viewers—especially to kids watching the movie—that’s it’s okay to flirt with married men.

But taking into consideration that Angelina comes from the magical but techie kingdom of Diwatara, flirting with married men might not be a big deal in her world.

Well, we don’t really know, as the movie gives very little background about her or the world where she comes from.

Also, a bit of a turn-off are the shameless product placements in the movie and an actual full-length commercial spot of a cell-phone network company.

We can blame it on economics. Perhaps the filmmakers wanted another source of revenue other than the movie's box-office earnings?

Despite these minor flaws, for a fantasy-comedy movie, Si Agimat, Si Enteng Kabisote, At Si AKO still succeeds in entertaining, as its strong box-office returns suggest.

Expecting too much from the movie or taking its flaws seriously may just spoil one’s craving to be entertained.

After all, why would you be watching a predictable comedy movie in the first place, if you want to take everything seriously?