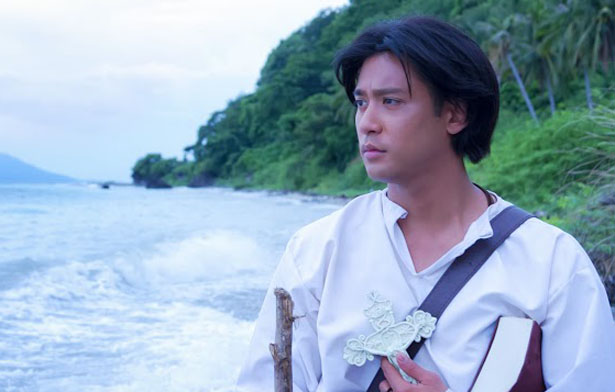 Rocco Nacino says the challenge of the movie is to make Pedro Calungsod as real as possible for viewers.

It may seem like just another role for actor Rocco Nacino, but he admits that playing the title role in Pedro Calungsod: Batang Martir has changed his life in ways he never imagined—from the way he was offered the role to the challenges they faced while filming the movie.

Although the role was originally offered to another actor, Rocco brushes off any insecurity. “It doesn’t matter, kasi importante sa akin na they trust me with this role. Yun lang yon. And I have the challenge to do my best and make it as real as I can,” adds Rocco.

In preparing for the role, Rocco had to put in a lot of work, from “looking at pictures, reading the script, internalizing the whole day. I also [spent time] talking to direk [Francis Villacorta] and other cast members para mas makuha ko yung character ko. It [was] a long process but worth it naman.”

Just how did playing the role of the second Filipino saint change Rocco’s life? From the way everything fell into place, the way he was introduced to the director (after a random basketball game with common friend Robert Correa)—all these Rocco considered to be life-changing.

“With the happening of events na dumating, looking back, parang masasabi ko sa sarili ko na this is like God’s blessings. Maybe it was St. Pedro Calungsod touching my life, blessing me, and calling out to me. Naramdaman ko talaga siya…and mas kinakausap ko siya ngayon. That has happened through this film,” Rocco concludes.

The movie opens in cinemas on December 25.