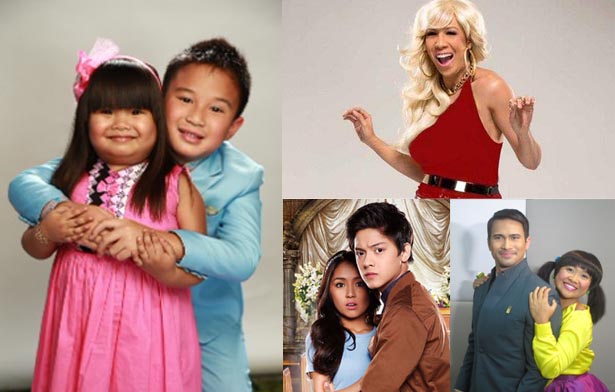 According to a text message sent by the Metro Manila Development Authority, organizer of the MMFF, ticket sales have reached P597 million as of December 31, 2013.


Just like on December 25, My Little Bossings is still in the lead, followed by Girl, Boy, Bakla, Tomboy, Pagpag, Siyam na Buhay, and Kimmy Dora (Ang Kiyemeng Prequel) in that order.

My Little Bossings tells the story of Justin (played by Bimby), a boy who is forced to live with the family of a street smart girl named Ching (played by Ryzza Mae).

In the movie, Vice plays four characters—quadruplets separated at birth—who are reunited to help save the life of one of their siblings. Maricel plays the quadruplets’ mother.

Kimmy Dora (Ang Kiyemeng Prequel) brings back the hilarious twin characters of Kimmy and Dora, as they work together to save their family business from terrorists.

The MMDA did not disclose the box-office figures of the top four box-office earners nor did it reveal the ranking of the bottom four.


Completing this year’s official entries to the MMFF are the following (in no particular order):

10,000 Hours, dubbed as true-to-life fiction, depicts the story of a government official’s fight against corruption. Robin Padilla plays the title role in this movie, which was shot mostly in Amsterdam.

Boy Golden: Shoot-to-Kill, starring ER Ejercito and KC Concepcion, is about the life of a gangster who ruled Tondo in the ‘50s and '60s.