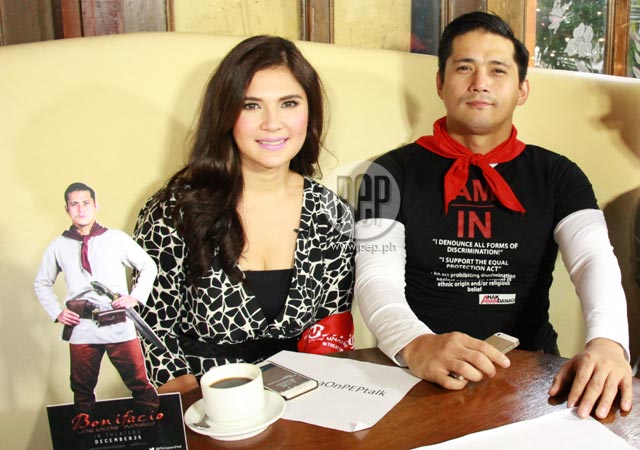 Robin Padilla (right), who plays the title character in Bonifacio: Ang Unang Pangulo, says he completely trusted director Enzo Williams, to the point of agreeing to work with an international fight choreographer who worked on past James Bond films. Vina Morales (left) is cast in this film as Oryang, the wife of Andres Bonifacio.

“Mahal po talaga. Napakamahal,” says Robin Padilla of the production budget for the movie Bonifacio: Ang Unang Pangulo, which is one of the official entries to the 2014 Metro Manila Film Festival (MMFF).

This period film, one of several Filipino films that tackle the life of the Filipino revolutionary, promises to portray Andres Bonifacio in a different light.

The action star credits director Enzo Williams for not going with the usual Filipino mentality of “puwede na 'yan.” According to Robin, Direk Enzo is not the type to make compromises on the quality of the film.

The movie marks a first in the Filipino film industry. Scenes were shot using the ARRI Alexa camera with anamorphic lenses, and the complete ARRI raw post-production workflow was used afterwards. The high precision camera plus high-tech editing procedures produce crisp and clear images favored by the makers of Hollywood movies such as Gravity and Iron Man 3.