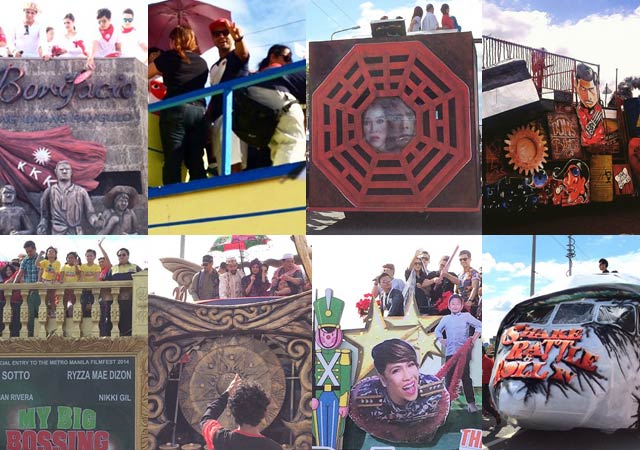 For the seventh straight year, PEP.ph (Philippine Entertainment Portal) brings you the highlights of the 2014 Metro Manila Film Festival (MMFF) through a microsite featuring the official movie entries and their stars. To get more information about the entries, visit the Updates section and to view photos and videos, visit the

This Christmas season, Filipino moviegoers can choose among the four sequels, an historical period film, an action flick and a romantic comedy that will be shown as part of the 2014 Metro Manila Film Festival.

Now celebrating its 40th year, the MMFF is held “in recognition of the role of the film industry in providing artistic depictions of both this country’s stories and history,” as described in the Metro Manila Development Authority website. The MMDA supervises the annual film festival along with key members of the film industry.

This year, there are eight official movie entries in the Mainstream section of MMFF 2014:


His ex-girlfriend, Vina Morales, is cast as Andres' wife Gregoria "Oriang" de Jesus. According to the actress, she still felt the chemistry that they became known for at the height of their popularity during the '90s.

In the romantic comedy English Only, Please, Derek Ramsay and Jennylyn Mercado find love in the most unexpected circumstances. Derek is cast as Julian, a balikbayan who wants to exact revenge on his ex-girlfriend (played by Isabel Oli). He hires Tere (played by Jennylyn Mercado) to help him translate his hate-filled letter from English to Tagalog. Can his tutor help him finally move on from his bad breakup?

Feng Shui 2 continues the story of the Kris Aquino blockbuster hit Feng Shui, which was first released in 2004. Coco Martin now leads the cast members who must find a way to break the curse of the mysterious bagua.


Kris reprises her role as Joy, a woman who has dealt with the good luck and the death brought about by the eight-sided mirror. This time, Lester (played by Coco) must deal not only with the deadly Lotus Feet but her sinister twin as well.


This horror film is graded A by the Cinema Evaluation Board.

Dingdong Dantes fights another type of supernatural creature in Kubot: The Aswang Chronicles 2. This time, Dingdong's character Makoy takes on the kubot, the widows of the aswangs that were killed during the first installment. They use their long flowing hair as their weapon while their tongues can suck the internal organs of their victims. Makoy and his leading lady Lex (played by Isabelle Daza) must join forces to fight Dom (played by KC Montero) who wants to transform humans into aswangs.


This comedy action film is also graded A by the Cinema Evaluation Board.

(Read: Will Dingdong Dantes have Marian Rivera as leading lady in next Aswang Chronicles?)


My Big Bossing brings back Vic Sotto in a sequel to last year’s My Little Bossings. The three-part movie shows Ryzza Mae Dizon taking on different characters in the fantasy Sirena, the horror-comedy Taktak, and the family story Prinsesa.

In Sirena, Ryzza Mae studied scuba diving in order to portray her role as a mermaid.

Marian Rivera joins Vic in the Taktak episode wherein she portrays a executive producer seeking for the truth.

The Prinsesa episode will feature Nikki Gil, Zoren Legaspi, Sef Cadayona, and Buboy Garovillo. Child star Alonzo Muhlach will also appear in this episode along with his father Niño Muhlach.

ER Ejercito stars in a remake of the 1986 Fernando Poe, Jr. (FPJ) action blockbuster film Muslim Magnum .357, with Sam Pinto as leading lady. The movie is a tribute to FPJ, and also honors the Filipino-Muslim community and Muslim police.

Vice Ganda reprises his role as the soldier with a big heart in The Amazing Praybeyt Benjamin, this time with Richard Yap and Alex Gonzaga as his co-stars. They are also joined by James “Bimby” Aquino Yap who is blessed with exceptional abilities.


Criminal mastermind Janjaranjan (played by Tom Rodriguez) wants to blow up the Philippines and the whole world with a massive bomb. It is up to Benjamin to convince the young prodigy to help them diffuse the bomb before it is too late.

Shake, Rattle and Roll XV features three segments: Ahas, Ulam and Flight 666, all promising to send chills down your spine. Erich Gonzales and JC de Vera are part of Ahas, which tackles the urban legend about a snake woman; Dennis Trillo and Carla Abellana have a terrifying secret in Ulam, while Matteo Guidicelli and Lovi Poe attempt to survive a flight from hell in Flight 666.

To get more information about the MMFF 2014 entries, visit the Updates section and to view photos and videos, visit the Multimedia section.