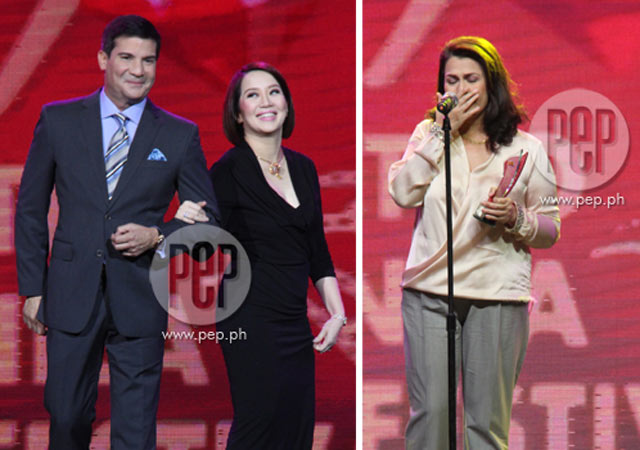 Jennylyn and Lotlot cried when they received their acting awards.

Lotlot tearfully said it was her first time to receive an acting award. The GMA-7 actress offered this acting recognition to her children.

JENNYLYN WINS FOR ROM-COM. Meanwhile, another source witnessed how Jennylyn shed tears when she went backstage after receiving her trophy for the romantic comedy English Only, Please.

“For pushing me so hard para gawin ko ‘tong pelikulang ito, thank you so much my manager, Tita Becky [Aguila].

However, Joey Marquez and Derek Ramsay weren’t able to make it to the Awards Night.

Jennylyn received the Best Actor award in behalf of Derek and delivered his speech.

“I would like to apologize for not being here to accept this prestigious award.

“First, thank you Jen for accepting this award on my behalf.

“This movie would not have been a success without Jen’s friendship, professionalism and abundant talent.

“I’d like to thank our brilliant director for his skilled leadership and the writers for coming up with such an amazing script.

“Thank you, Atty. Joji for giving me this opportunity, mahusay kayong lahat.

“I’d like to thank all my fans for always supporting me.

“Thank you to my family for whom I draw my strength and inspiration.

“Love you all very much, Joji my manager, kasama ka ‘don.

“Lastly, to MMFF, thank you for this award and for its dedication in promoting the Filipino movie industry.

“Let’s all continue to promote and celebrate local talent.”

Derek bested other contenders in the Best Actor category: Coco Martin for Feng Shui and Dingdong Dantes for Kubot: The Aswang Chronicles 2.

Their horror movie, Feng Shui 2, did not receive any award during the Gabi ng Parangal but it emerged as the second highest-grossing MMFF entry on opening day, December 25.