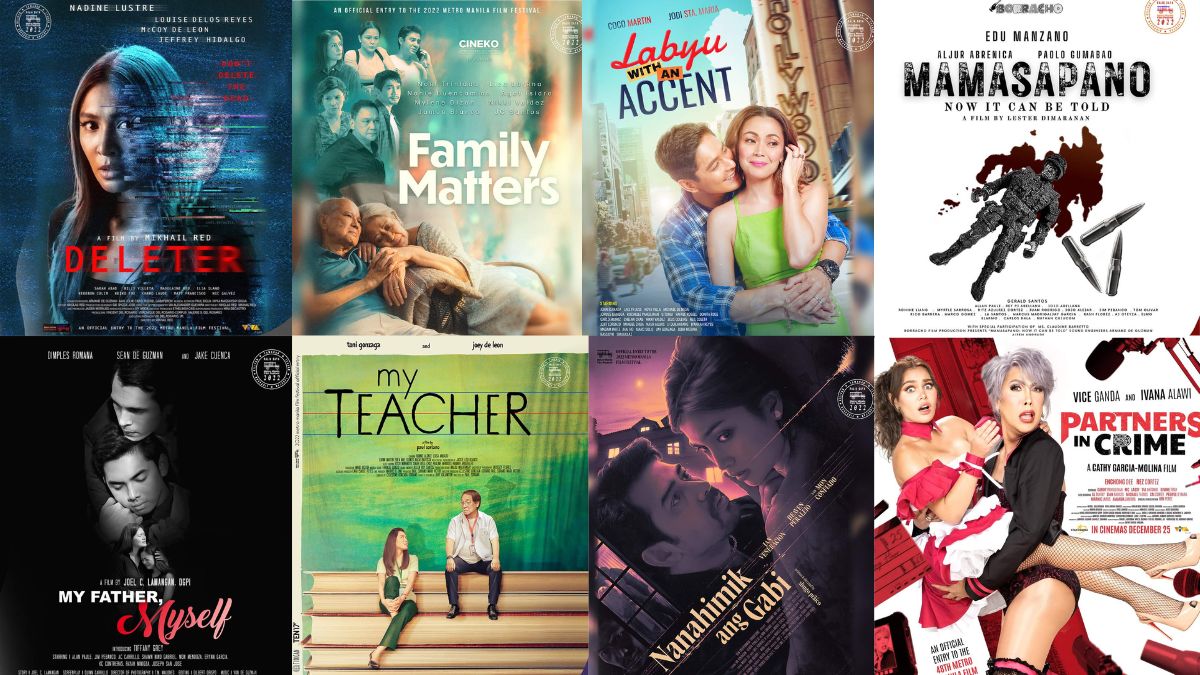 The theme “Balik Saya sa MMFF 2022” reels in the 48th edition of the annual Metro Manila Film Festival (MMFF), adding more joy and excitement to the celebration of Christmas.

The yearly Christmas film festival will take place from December 25, 2022, to January 7, 2023, galvanizing filmmakers and moviegoers in light of the eased restrictions on entertainment venues two years into the pandemic.

Awardees will be recognized at the “Gabi ng Parangal” scheduled on December 27, 2022.

In alphabetical order, here is the list of Filipino-made movies that are likely to hit the box office this MMFF 2022:

Deleter follows the story of Lyra (Nadine), who works as an online content moderator who removes violent videos online. She faces trauma from watching disturbing footages in her job, but she hides how she feels from her colleagues.

Family Matters tells the story of Francisco (Noel), an ageing head of family hit by a stroke and being taken care of by his wife, Eleanor (Liza), and children, leading to conflicts within the family.

Labyu with an Accent revolves around the story of Gabo (Coco) and Trisha (Jodi) whose backgrounds are entirely different from each another.

Trisha has spent years living and working abroad all that time that Gabo has been struggling to make ends meet in the Philippines.

Mamasapano: Now It Can Be Told is based on the true story of the bloody police operation in 2015 known as the "Oplan Exodus," which claimed the lives of 44 Special Action Forces (SAF 44) officers in Mamasapano, Maguindanao.

My Teacher will be a heartwarming and feel-good movie giving tribute to teachers, based on the movie's teasers.

Nanahimik ang Gabi tells the story of a sugar baby (Heaven) of a corrupt police chief (Ian) and how their weekend getaways are interrupted by an intruder (Mon).

Partners in Crimes follows the story of an ex-couple who are brought together when both get involved in a crime.