PEP REVIEW: Gwen Zamora's The Witness builds up slowly for a shocking ending 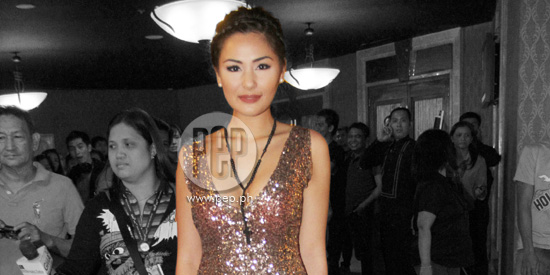 Starring Gwen Zamora (in photo), The Witness is currently being screened in Philippine cinemas. This horror film, shot entirely in Indonesia, is graded A by the Cinema Evaluation Board.

The Witness is an admirable effort.

The new movie from GMA Films (co-produced by Skylar Pictures of Indonesia) does many things right that it succeeds as a horror film.

Unfortunately, what could be off-putting for mainstream Filipino moviegoers is that The Witness does not follow typical Pinoy horror movie conventions. The Witness is not similar to recent box-office hits like Dalaw and Segunda Mano, films that senselessly pound viewers with scare-after-scare to establish their horror cred.

The Witness is more masterful. In the press preview that PEP attended last Monday, March 19, the most common gripe about the movie is that the pacing is too slow. But in this reviewer's opinion, this slowness helps the movie more than it deters it.

In fact, the very best of Asian horror cinema are known for their slow pacing. Examples of these are great films like Kiyoshi Kurosawa's Cure, Takashi Miike's Audition, and Park ki-hyung's Acacia. (A Western film that could also be cited as an example is the recent The Woman in Black, starring Daniel Radcliffe.)

The slow pacing is essential to create each of these films' heavy moods and eerie atmospheres. The pace also gives the endings more weight, because they stand out from the rest of movies' muted tones.

This is what director Muhammad Yusuf achieves for The Witness. The plot moves at a glacial phase, but the jaw-dropping reveal at the ending more than makes up for it.

So with the slow pacing, is the movie boring? Far from it. At the center of the movie is Filipina actress Gwen Zamora, who gives such a strong performance that makes the movie compelling, minute by minute. Gwen plays Angel, a hotel manager who survives the massacre of her family. Distraught by the tragedy, she needs to face her own ghosts to find her family's killer.

Helping Gwen are Indonesian actors Nigel Ryder, Kimberly Ryder, and Marcelino Lefrandt. A special mention must also be given to actor Agung Saga, who plays Ais. His performance is outstanding.

Should you see The Witness? Yes, you must. But don't expect a typical Pinoy horror movie, because this one is better.

The Witness, graded A by the Cinema Evaluation Board, is currently being screened in Philippine cinemas.