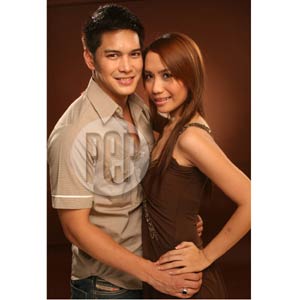 Louie (Luis Alandy) tries to solve the mystery behind the death of his childhood friend Elma (played by Chx Alcala, right) in the indie movie Signos (The Sign). This horror-drama film is written and directed by Aloy Adlawan.

After producing the controversial film about miners titled Troika, Daven Productions is now back with its second indie movie tackling environmental issues and supernatural forces.

The horror-drama film Signos (The Sign) will have its commercial premiere tonight, August 20, at SM Megamall and will be screened in theaters starting August 22. The film held its world premiere during the third Cinemalaya Philippine Independent Film Festival last July 24, 2007.

It is written and directed by Aloy Adlawan, the same man who penned the screenplay for Ouija. The 38-year-old writer-director from Samar told PEP (Philippine Entertainment Portal) the gist of his latest project. "Ang kuwento niya is about a man na galing ng probinsya na successful na sa Manila. Then he goes back to the province para [tulungan] 'yung father niya.

"He finds out na maraming mga killings dun sa town niya, na pare-pareho 'yung pagkamatay nung mga victims. And then the deaths are parang getting closer to the family. Doon nagrevolve yung kuwento. Then it turns out to be supernatural. It's a story about going back to [your] roots and healing as well," narrates Aloy.

Louie (Luis Alandy), a young architect, receives a text message from the province that his father, Ulding (Ricky Davao), had a heart attack. Louie leaves behind his wife Sandra (Nancy Castiglione) in Manila but finds out that the message was nothing but a prank. Louie then senses something eerie about his hometown. He finds out there have been several killings in the barrio, all done in the same manner. Apparently, the victim first hears some rumbling noise; that is, before they are found dead all covered with mud.

Louie learns that his childhood sweetheart, Elma (Chx Alcala), is one of the victims. He visits her wake and is forced to confront an unresolved issue with Elma's husband, Nestor (Lauren Novero), who was once Louie's best friend.

Meanwhile, Sandra find out that she is pregnant and when she informs her husband that he would be a dad soon, their cell phones malfunction, making it part of the mysterious occurences in Signos.

As the day draws to an end, Louie is also forced to resolve his long-standing conflict with his father who is now married to their servant, Cora (Irma Adlawan), a simple mystic. Ulding has refused all of Louie's invitations to stay with him in Manila because of his new family.

When the killings move closer to home and threatens Louie's family, he discovers for himself how he had been estranged from his roots and now must face his past with the horror of what is to happen.

Signos (The Sign) will be screened in 30 select theaters starting this Wednesday, August 22.