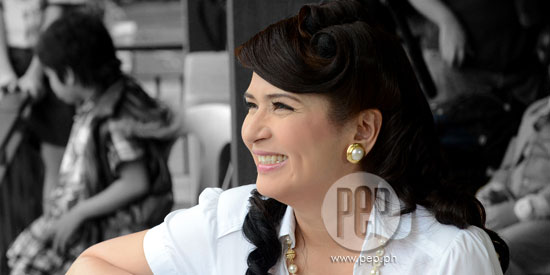 Zsa Zsa Padilla says she enjoys working with Eugene Domingo, who plays the mother of Sam Concepcion—the guy who got her daughter, Tippy dos Santos, pregnant.

“The story revolves around planning their marriage and I am against it because in the movie I got pregnant also.

“The same thing happened to me, I got pregnant but I married young, and I got trapped not in a loveless marriage, but in a marriage that I’m very unhappy with because my husband has no time for me, he’s always buried in work.

Natawa si Zsa Zsa bago sumagot, “I’m glad that it didn’t happen to them, my youngest is 20.

“Kasi parang I think their whole lives they have heard me, I tell them over and over, ‘please, don’t marry young.’

“You know I was lucky in a sense that I had a baby at 16, I went back to school, I had a career at 18, and you know it doesn’t happen for everyone.

“So, what I went through is hard, and I’ve learned from the mistakes that I’ve made in the past.

“It’s my responsibility to warn them that it’s not easy, and it’s not really easy.”

“Music makes me happy, in any musical actor or actress, when you say you’ll do a musical you know it’s hard to combine.

“But in instance, lets say I did a musical action, comedy, Zsa Zsa Zaturnnah, I know that if people was able to appreciate it that time, it’ll be a classic project, it’s something I’ll never regret doing.

“So, if people were to ask me again if ‘would you have done it?’ I would.

“So, I’d say the same thing with this project.

“Of course it’ll be an added bonus if people really like it after they see the film. That’ll be a welcome change, kasi that’ll be a history, e.”

“She’s a fun person to be around, she’s really funny, she’s funny kasi behind the cameras and in front of the cameras, e.

“Everybody is happy for Uge [palayaw ni Eugene Domingo], ilang years na din siyang nasa showbiz and everything that’s happening to her is just something that she has really worked hard for.

“So, everybody is just supporting her and you know everyone is happy with everything that is happening in her career.”

“Well, I guess they really have to learn the songs.

“I mean, to us it came out naturally because I grew up working with APO music.

“I remember, most of songs would have an APO medley in it, and I’ve worked with the APO Hiking Society many times in my career I got a wonderful chance to do that.

“But I think that it’s timely, that there’s so much talk about the “golden days of OPM,” that they’re here, they’re back, that everybody is excited with OPM.

“I think with this project, when the youth today will hear this music, ‘oh, that original!’ di ba, kasi I don’t know if their parents have played the music, siyempre ibang generation na, right?

“So, it is exciting in a sense that a lot of songs have been rearranged, it’s exciting in that sense, and there is really lots of music in this musical.”