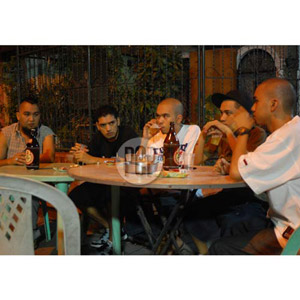 Real-life gangsters and rappers are recognized once again for their performance in Tribu. The cast of Jim Libiran's gritty Tondo film won the Best Ensemble (International) during the recently concluded 9th Cinemanila International Film Festival (CIFF).

The non-professional actors also bagged the Best Actor Award during the 2007 Cinemalaya Philippine Independent Film Festival held at the Cultural Center of the Philippines last July.

President Gloria Macapagal-Arroyo gave out the awards during the awarding ceremonies of the ninth CIFF at the Rizal Hall of Malacañang last August 15, 2007. Despite the onslaught of Typhoon Egay (international code name Sepat), Hollywood director Quentin Tarantino braved the floods of Manila and rode a pedicab to reach the official residence of the President.

He received his Lifetime Achievement Award along with another recipient Robert Malengreu, director of the Belgian Independent Film Festival.

Filipino filmmaker and director Cirio Santiago was also given a special citation for his pioneering work in foreign co-productions for the global market, starting in the early ‘70s when he produced and directed English movies for American audiences.

The film festival has been extended at the Gateway Mall until August 28, 2007.

Here is the complete list of winners for Cinemanila 2007: