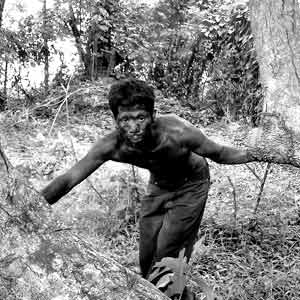 Above, a scene from Kagadanan sa Banwaan ning Mga Engkanto (international title: Death in the Land of the Encantos). Director Lav Diaz shot the film in Padang, Legazpi City, where a village was buried by landslides caused by super typhoon Reming.

Lav Diaz is one of 13 directors who will compete for the Artistic Innovation Award in the 2007 Toronto International Film Festival (TIFF). His latest film Kagadanan sa Banwaan ning Mga Engkanto (international title: Death in the Land of the Encantos) will premiere in North America during the film fest, which will take place from September 6 - 15.

The eight-hour epic film—largely improvised and shot in black and white—will also compete in the 64th Venice International Film Festival that will run from August 29 to September 8. Kagadanan will also be the closing film of the Orizzonti section of the film fest.

Aside from Lav Diaz's work, two other Filipino entries were selected to be part of the Toronto International Film Fest. Brillante Mendoza's Tirador (Slingshot) and Auraeus Solito's Pisay (Philippine Science) will also hold their world and international premiere, respectively, at the TIFF, which is considered the second largest film festival in the world and the biggest in North America.

Kagadanan was born out of the destruction left behind by super typhoon Reming (international name: Durian), which hit the Bicol region on November 30, 2006. Lav tells PEP (Philippine Entertainment Portal) via email how he came to create this aesthetic piece:

"Two weeks before the typhoon struck, I wrapped the four-month shoot of Heremias Book 2 in the very same places that the typhoon destroyed. A good part of Ebolusyon ng Isang Pamilyang Pilipino was also shot there three years ago. I've become so attached to the place.

"I didn't realize the magnitude of the devastation till I had gained enough courage to visit the place a week later. The places where we shot scenes were all in ruins; the roads were gone, the houses were either buried or torn to pieces, structures collapsed. It was unbelievable, horrifying. Gloom and sorrow were all over the place. The smell of death was hovering in every corner, even in sleep and in dreams," he recalls.

In a span of six weeks, the story grew and evolved until Lav developed the main character of Kagadanan, a Filipino poet named Benjamin Agusan. Roeder Camanag plays the hapless native who returns to his hometown Padang to witness the aftermath of the super typhoon.

For the past seven years, Benjamin had been living in an old town called Kaluga in Russia. With his grant and residency, he taught and conducted workshops in a university. The poet published two books of sadness and longing in the process.

In Russia, Benjamin was able to shoot video collages, fell in love with a Slavic beauty, buried a son, and almost went mad. He came back to bury his dead—father, mother, sister and a lover. He came back to face Mount Mayon, the raging beauty and muse of his youth. He came home to confront the country that he so loved and hated, the Philippines. He came back to die in the land of his birth. He wanders around the obliterated village meeting old friends and lovers.

Shot in black and white, Kagadanan sa Banwaan ning Mga Engkanto (Death in the Land of the Encantos) expresses an inexhaustible belief in the regenerative power of both nature and art.

With reports from Carmeline Melany Rubi