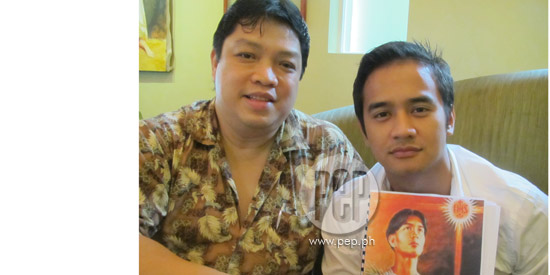 The film biography will trace the young martyr’s journey of faith into sainthood. Pedro Calungsod was a catechist who joined a missionary trip to the Ladrones Islands(now known as Guam) in 1668 to evangelize the Chamorros.


The missionary-turned-martyr was declared “Blessed” by Pope John Paul II on March 5, 2000. Pedro Calungsod will be canonized by Pope Benedict XVI on October 21 on the occasion of World Mission Sunday.


This will make Pedro Calungsod the second Filipino declared a saint after San Lorenzo Ruiz.


Writer-director Francis Villacorta admitted, “From the very start of this project, I knew that JM is the perfect Pedro. Call it intuition but it’s just in his eyes. I am now in the process of drawing parallels between him and Pedro so I can mold a memorable screen character.”

JM is a Theater Major from the University of the Philippines. He has been in various productions including the musical Isang Pangarap Na Fili. On film, he has appeared in the Cinemalaya entries Last Supper No. 3, Rekrut, and Ang Babae sa Septic Tank. He also starred in Pintakasi, an indie film that combines live action and animation, allowing him to win as Best New Wave Actor during the 2011 Metro Manila Film Festival.

Direk Villacorta also observed, “JM has revealed incredible acting range that triggered my interest in getting him for the role of Pedro Calungsod. The fact that little is really known about the young Filipino martyr makes this cinematic mission our very own journey into discovering him.”

Direk Villacorta remarks, “I hope our film can inspire young people today to go beyond the gadgets and other disturbances of modern technology and find true meaning in a spiritual bond with Jesus Christ. San Pedro Calungsod would love that.”

He is scheduled to mount on stage Man of the Masses: The Ramon Magsaysay Story and Venceremos: Che Guevarra. Soon, he will also direct Voltar, Tomas Claudio: The Forgotten Hero and The Good Fighter: The Manuel L. Quezon Story.