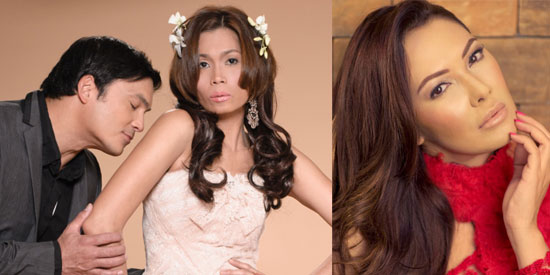 The Mommy Returns is topbilled by (from left) Gabby Concepcion, Pokwang, and Ruffa Gutierrez. This horror-comedy will open in cinemas starting May 9, 2012.

Regal Films pays tributes to mothers through its newest movie titled The Mommy Returns. The movie will be screened in cinemas starting this Wednesday, May 9, in time for Mother’s Day celebration this Sunday.

The Mommy Returns is a horror-comedy flick that depicts a mother’s enduring relationship with her family.

For his part, Gabby Concepcion shared details about his kissing scene with Pokwang, who plays his first wife in this movie.

Ruffa Gutierrez, who is cast as Gabby’s second wife in the film, said that she had a lot of memorable experiences while doing this movie.

“I enjoy the most pag off cam kasi chikahan lang kami ng chikahan ni Tita Gloria. We talked about so many things and I’ve learned so much from her. In terms of advice, in terms of love, life, children, men, never ending ang mga kwento namin,” Ruffa recalled.


The Mommy Returns has an underlying theme of maternal love. There is the mother who refuses to leave her children behind (Pokwang) and the woman who yearns to fill the void left by a mother’s death in three children’s lives (Ruffa).

SYNOPSIS. Ruby (Pokwang) dies on the day of her 25th wedding anniversary with her husband William (Gabby Concepcion).

After her death, she does everything in her power to evade Dyosa ng Purga (John Lapus) and the pet chicken of San Pedro called Manny.

Ruby is having a hard time moving on to the next life because of her love for her children (played by Kiray, Gerald Pesigan, and Jillian Ward).

William then takes on a young, sexy, and gorgeous woman, Catherine (Ruffa Gutierrez), as his new wife.

When Catherine tries to replace Ruby as a mother to her three children, Ruby exits Purga and slips back to Earth as a ghost to frighten away the stepmom and resume her position as madre de pamilya.

Among the highlights of the movie is the “war of the mommies,” which takes place in a lahar-covered area in Pampanga. Ruby and Catherine will slap and hurt each other in a rioutous showdown.

The Mommy Returns is directed by Joel Lamangan and written by Senedy Que. The film opens on May 9 nationwide.