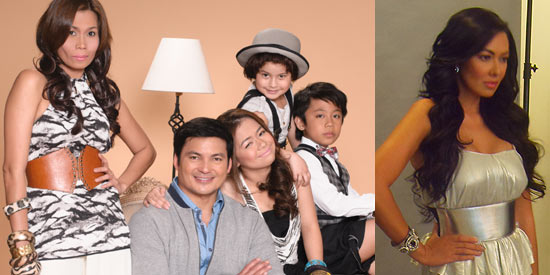 Based on the trailer of The Mommy Returns, it seems that this movie is a generic mainstream comedy film.

This is a pity, though, because this movie is more than what the trailer shows it to be. The trailer sells this new Regal Films movie's comedy hijinks, when it should have sold its heart.

The Mommy Returns is directed by Joel Lamangan, and stars Pokwang, Ruffa Gutierrez, and Gabby Concepcion.

It tells of the story Ruby (Pokwang), a mother who dies on her 25th wedding anniversary. After being sent to purgatory, she learns that her husband William (Gabby Concepcion) has hastily married a young pretty woman named Katherine (Ruffa Gutierrez), she returns to Earth to protect her three children.

While Pokwang's comedic abilities is undeniable, her role still looks like a step back from her exceptional work in A Mother's Story, where she played an OFW mother who faced hardship abroad to provide for her family.

A Mother's Story established Pokwang as an actress, one who can deliver a credible dramatic performance despite being typecasted as a dimwitted comedian in her previous works. A Mother's Story also gave the viewers the trust that she can pull off other dramatic roles, one that we are now seeing in ABS-CBN's Aryana.

The Mommy Returns lets Pokwang play another mother, but somehow her performance here is weaker.

Pokwang only shines whenever the movie puts up an air of sentimentality, when it is acknowledged that her character is a mother who only wants to take care of her kids, and not a ghost that only brings mischief.

When the movie takes a turn for comedy, Pokwang's performance dulls. Somehow, her jokes aren't funny, and her performance looks trying too hard.

This is also the same with other members of the cast. Ruffa Gutierrez's acting woks in scenes when she's trying to learn how to be a mother, and not when she's being the butt of the jokes. Gabby Concepcion gains credibility when his character needs to bond with the children, but not when a joke is being set up. There his performance seems forced.

The characters playing the children all fare better. Kiray Celis is perfect as an angry child who cannot accept her stepmother, Gerald Pesigan's young gay character somehow elicits a few chuckles, and Jillian Ward is still a reliable child performer.

And there's also John "Sweet" Lapus, who's funny in the few scenes given to him as the Diyosa of Purga (purgatory).

All in all, The Mommy Returns is a good movie, but only when you consider its dramatic moments. It has a heart buried somewhere that can be inspiring to viewers who want to relate to its story about motherhood.

If only the trailer chose to show its heart from the start, and if only the director chose to polish its heart more, then this will be the perfect movie this Mother's Day.

The Mommy Returns is being screened in cinemas nationwide.