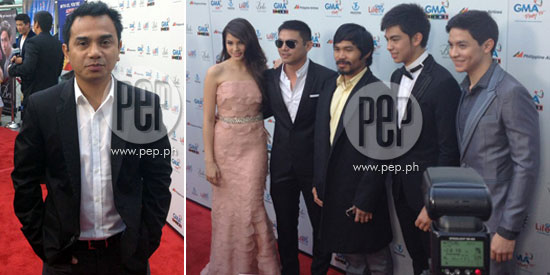 At 5:30 p.m. on Wednesday, May 9 (U.S. time), the stars of GMA Films’ 2011 horror film The Road walked down the red carpet and posed for the foreign media covering the film’s Hollywood Red Carpet Premiere held at the majestic Arclight Theater in Los Angeles, California.

The Yam Laranas film, which received rave reviews from both the local and foreign press and even caught the attention of the New York Times, is set to be commercially released in the U.S. and Canada beginning May 11 (May 12 in the Philippines) through a distribution deal between GMA Films and US-based film distribution company Freestyle Releasing.

After the premiere screening of The Road, an after party was held at The Lure, a club beside Arclight Theater.

Prior to the red carpet premiere, GMA Films and Freestyle Releasing held a press conference on May 8 at the Barrio Fiesta Restaurant in Glendale, Los Angeles. It was attended by representatives from US-based Filipino media outfits.

Apart from the U.S., The Road will also be shown in selected theaters in Singapore beginning May 15.

Talks between GMA Films and other film releasing companies are also underway for possible distribution of The Road in other countries.

The Road premiered in the Philippines in November 2011. This horror-suspense film is currently being screened in select SM cinemas.