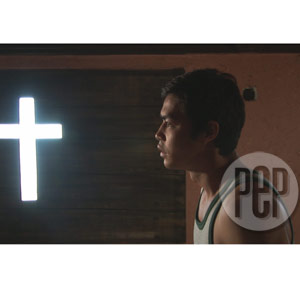 Zanjoe Marudo plays Anton, a boxer-turned-carpenter who encounters supernatural forces in the indie film Altar. This Cinema One Originals 2007 entry is directed by Rico Maria Ilarde.

In line with the theme "Ang Kuwento ng Pinoy sa Buong Mundo," Rico Maria Ilarde submitted his entry Altar for the 2007 Cinema One Originals Digital Film Festival. After months of deliberation, his film proposal was chosen as one of the five entries competing for prizes in the annual competition sponsored by ABS-CBN's movie feature channel.

This mystery-suspense-thriller follows the exploits of Anton (Zanjoe Marudo), an ex-boxer who agrees to do carpentry work on a solitary house that harbors dark secrets. This digital film was shot for eight days in a house that straddles the boundary of Antipolo and Binangonan.

Altar director Rico Maria Ilarde reveals that he was wary about casting Zanjoe Marudo for the lead role. "Initially, I had apprehensions because Zanjoe is known for being laidback. But upon the suggestion of Ronald Arguelles, the project head of Cinema One Originals, we got him. He was the one who suggested him and believed in his potential as an actor," he recalls. "I'm very happy with our collaboration. It was very fruitful."

As for the female lead character, Rico told PEP (Philippine Entertainment Portal) that the role of Angie, one of the maids who will become Zanjoe's love interest, was actually written with a particular actress in mind. "Originally, the role was written for Neri Naig [an alumna of reality-based talent search Star Circle Quest]. But right before the shoot, she got sick, so we looked for a replacement, which is why we got Dimples Romana."

The Third Annual Cinema One Originals Digital Movie Festival and Awards Night are set to run in September 2007.

Altar is a mystery-horror-thriller that tells the story of Anton (Zanjoe Marudo), a former boxer who retired upon accidentally killing an opponent in the ring during a prizefight in the U.S. Returning to the Philippines, he finds himself destitute and jobless. He is hired by a mysterious foreman named Erning (Dido dela Paz), who assigns him and a companion named Lope (Nor Domingo) to renovate a lone, decrepit house on a hill at the outskirts of Metro Manila.

While working in relative isolation in the house, an apparition of a ghostly child appears to Anton seeking his help to release her from the clutches of a demonic-looking entity dressed in a cloak and mask, who enslaves the little girl inside the second-story room of the house.

Despite specific instructions not to open the locked basement door of the house, the mischievous Lope's insatiable curiosity leads him to do the exact opposite. He inspects the contents of that peculiar cellar of the home. Standing against a corner wall of the room, he finds a large antique wooden altar on top of which is the carved bust of a strange dark woman, eyes shut, seemingly in peaceful prayer.

One creepy event leads to another. The men make the acquaintance of a pair of pretty maids, Angie (Dimples Romana) and Giselle (Kristalyn Engle), who work for one of the neighborhood's other households. Anton and Angie quickly develop a budding romance and he solicits her help to unlock the ghostly house's strange and dark mystery.

Little does Anton know that his arrival in the house was never sheer coincidence, but the deliberate, nefarious plan of a mysterious figure doing the bidding of a truly terrifying and evil force.

Bloodcurdling events occur, one after the other, till all these snowball towards a deeply disturbing, violent climax.