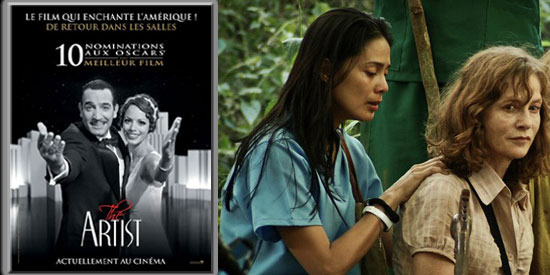 In their continuous efforts to acquaint Filipinos with French culture, The Embassy of France and the Alliance Francais de Manille present the French Film Festival, now on its 17th run this year.

From June 7 to 17, 2012, cinephiles will experience France’s art and culture through a strong selection of 17 French movies to be screened at the Shangri-La Plaza Mall’s Cineplex.

The multi-awarded black-and-white, silent picture The Artist kicks off the festival in a glamorous 1930s, black-tie opening night. A film by Michel Hazanavicius, The Artist follows the life of silent picture actor George Valentin and the decline of the silent movies. While attempting to revive his career by producing his own film, Valentin crosses paths with Peppy Miller. The fast-rising, young dancer is also the star of a “talkie”— or the “sound film,” whose introduction in the film industry gradually replaces the silent pictures.


The romantic-comedy-drama received much acclaim in international film festivals including the 2011 Golden Globe and the 2011 Cannes Film Festival where its lead actor, Jean Dujardin, won Best Actor in both occasions. In the 2011 Academy Awards, The Artist bagged five accolades including Best Film, Best Director, Best Actor, and Best Original Screenplay.

France’s reputable filmmaker Oliver Assayas will honor the said film fete with seven of his works to be screened in retrospective. The UP Film Institute and the Cultural Center of the Philippines offers a chance for Assayas to share his passion for cinema through a dialogue between Filipino film directors and students on June 8 at the CCP.

As the festival falls on the week of the Philippine Independence Day, the festival pays tribute to Philippine cinema by featuring Filipino films that have made it to festivals in France or whose directors have participated in French workshops or seminars.


Featured at the Director’s Fortnight at the 2011 Cannes Film Festival, Busong by Aureus Solito will be screened, as well as Manila by Adolfo Alix Jr. and Raya Martin makes it in the festival’s repertoire. Bakal Boys by Ralstom Jover, who attended the Cine Funcadion of the 2012 Cannes Film Festival, and Sigrid Bernardo’s short films Little and Au Revoir Philippe, featured at the Apchat Festival, are also included in this year’s showcase of films.


Brillante Mendoza’s Captive, which stars French actress Isabelle Huppert, will likewise be added to the collection as it is a Franco-German-Filipino co-production. This will mark the Philippine premiere of the movie about tourists and missionaries kidnapped by armed men belonging to the Muslim Abu Sayyaf group. The film also stars Angel Aquino, Ronnie Lazaro, Raymond Bagatsing and Sid Lucero.

The organizing body of the Citi-Rustan’s French Film Festival will soon announce the screening schedules of the aforementioned 17-film selection.


The second leg of the film fest will run from June 21 to 23 at Ayala Center Cebu.