Will Paulo Avelino have butt exposure in the sexy romance-drama, The Lover and the Bride? 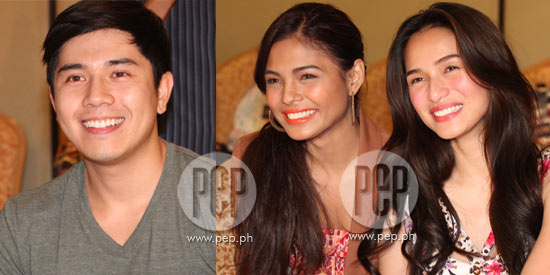 In the ABS-CBN primetime hit Walang Hanggan, Paulo Avelino plays the deceiving Nathan Montenegro, the third party in a love triangle with Julia Montes’ and Coco Martin’s characters. From the outset, the teleserye’s audience is privy to his split personality, which display Paulo’s acting range. From being gentle and reserved, his character quickly changes to a violent one, and even when Nathan acts calm around the meek Katerina (Julia), his eyes communicate rage and hostility inside him.

Paulo, who delivered a promising performance in the Cinemalaya independent film entry Sayaw ng Dalawang Kaliwang Paa with co-actor Rocco Nacino, is keen on braving roles that will allow his talent to grow.

This year, he starts working on his second full-length film, The Lover and The Bride, a production under Regal Films to be directed by Joel Lamangan. Paulo stars in this edgy and sexy romance-drama with Jennylyn Mercado and Lovi Poe whose characters will rival each other to win his love. While the script and the characters’s names are yet to be finalized, Paulo interestingly plays another Nathan.

In the film, Paulo will portray a coveted bachelor and car company salesman who will be the object of desire of best friends Vivian (Lovi) and Sheila (Jennylyn). Paulo as Nathan will initially cheat on Vivian, his fiancé, with his secret lover who happens to be Sheila.

The Lover and The Bride involves shooting steamy love scenes with his female co-stars which Paulo laughs at. He tells that butt exposure is not necessary at the moment. “I feel na hindi naman kailangan, e. More on the pag-sexy na part, parang mas sexy talaga yung mga lines, e, yung mga tinginan.”

Having done pictorials that exposed his lean physique and rocking abs, the 24-year-old actor says he has no reservations in doing sexy roles. However, he tries as much as he can to focus on the acting.

The Lover and The Bride just recently held its story conference and has yet to start shooting scenes. Paulo is currently studying his character.

He plans to bring in “the natural-ity” and “the intensity.”

In Walang Hanggan, working with Coco Martin has taught Paulo “the levels of intensity,” something he smiled at and did not explain.

At this point in his career, Paulo aims to discover the threshold of his acting.

“Hindi ko po talaga nili-limit yung sarili ko in terms of roles [and] in terms of characters that I can play.

“So, if they’re going to give me a role na mala-Johnny Depp, na out of this world, siguro I’d love to do it.

“If they’re going to give me a role na pang-leading man, I’ll give them what they need,” he assures.