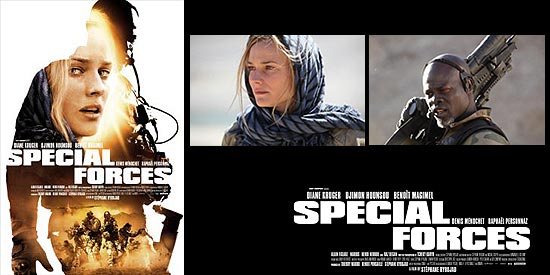 A film by Stephane Rybojad, Special Forces will be screened exclusively at SM Cinemas starting June 13, 2012. The film exposes the dangerous landscapes of Afghanistan where a war correspondent (Diane Kruger) is taken captive by the Taliban. A Special Forces group, led by Kovax (Djimon Hounsou), is sent by the government to save the journalist.

At a press conference at the SM Mall of Asia IMAX last Friday, June 8, Stephane Rybojad, director of Special Forces, told the invited media what inspired him to create the film.

In French, he told the Philippine press, “I am initially a documentary filmmaker. I have done more than 150 documentary films in all corners of the world, and including films.”

A war correspondent-turned-filmmaker, Rybojad said he had witnessed the action that takes place in the military when deployed in countries where war is happening.

“Sometimes there are journalists like myself who go to dangerous places and there are crazier people who come to get us out of those crazy places.”

Such first-hand experience brought about the suspense-action-adventure Special Forces, a film about a military team sent by the government to retrieve a war journalist taken hostage by the Taliban. Diane Kruger portrays renowned news correspondent Elsa Casanova who publishes an article on a notorious warlord named Zaief. Elsa calls him “The Butcher of Kabul” thereby earning her the ire of Zaief who eventually orders her to be kidnapped.

In bloody, action-packed scenes, Special Forces exposes the hostile environment of Afghanistan, meanwhile revealing the dangers that surround those who are involved in the war.

Apart from sorrow and adventure, Rybojad tells that Special Forces is mainly about “human hardships.”

He adds that there are no magic tricks in this film— “Everything was real.” In fact, the actors were trained by the Special Forces themselves making the scenes realistic from sleeping in tents and experiencing drastic temperature changes from minus 28 degrees to 50 plus degree Fahrenheit.

Rybojad likewise points out that he did have a hand in selecting his cast. While Diane Kruger was his first choice to play Elsa, Djimon Hounsou (Amistad, Blood Diamond, Gladiator) portrayed a crucial character in the film. Hounsou in Special Forces played Kovac, the African American leader of the Special Forces composed mostly of white Americans.

It will be exclusively screened in SM Cinemas starting this Wednesday, June 13.