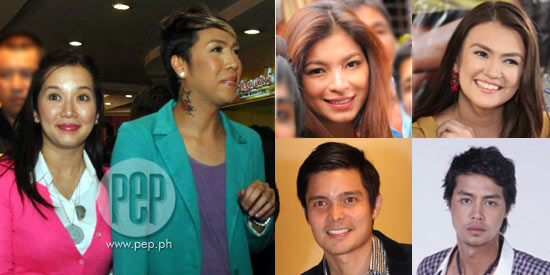 From Regal Films, the so-called “omnibus entry” Shake, Rattle and Roll will have its 14th installment this year. This three-part movie will feature Vhong Navarro, Dennis Trillo, Lovi Poe, Iza Calzado, Paulo Avelino, and Herbert Bautista. All three episodes will be directed by Chito Roño.

Star Cinema and Viva Films will have two official entries this year: Sisteraka and One More Try.

The former is a comedy film that will be topbilled by celebrity friends Kris Aquino and Vice Ganda. It will be directed by Wenn Deramas.

The latter, on the other hand, will have Dingdong Dantes, Angel Locsin, Zanjoe Marudo, and Angelica Panganiban as its lead stars. This romantic movie will be directed by Ruel Bayani.

Meanwhile, Vic Sotto and Senator Bong Revilla will work together in the fantasy movie Si Agimat, Si Enteng Kabisote, and Me. Judy Ann Santos joins them in this movie to be produced by OctoArts Films, M-Zet Productions, Imus Productions, APT Entertainment, and GMA Films.

This movie about the life story of General Emilio Aguinaldo will be produced by Scenema Concept International Inc., which created the remake of Asiong Salonga last year.

GMA Films will have a comedy offering for the MMFF titled Conyo Problem. This will topbill Aljur Abrenica, Solenn Heusaff, and Isabelle Daza. It will directed by Andoy Ranay.

Lastly, a new player is included in this year’s list as the script of Quantum Films’ movie The Strangers was chosen by MMFF executive committee. The movie will have Julia Montes, Enrique Gil, Enchong Dee, Jaime Fabregas, and Cherry Pie Picache as its main actors. Lawrence Fajardo will serve as the director.

FOLLOW THE APPROVED SCRIPT. In a short interview with Tolentino, he said that the movies were chosen using the same criteria it used in selecting films in previous editions of the MMFF.

He also reminded the producers to stick to the approved scripts to avoid being disqualified, which happened to Yesterday, Today, Tomorrow last year.

Yesterday, Today, Tomorrow was not able to compete in four major awards because of script changes during the production of the movie.

“This time, they have to follow the script they submitted. They can change the titles but not the script, ‘yon na ang na-approve, eh,” warned Tolentino.