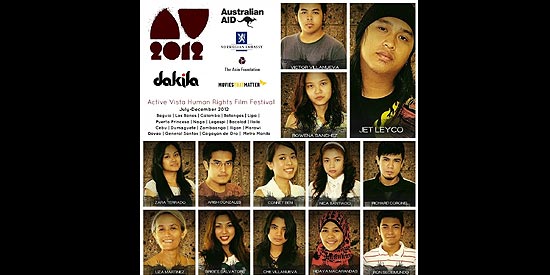 Dakila Artist Collective President and pop culture icon, Lourd de Veyra, once said, “The worst load of bull ever said about cinema is that it can change society.” For the human rights film festival, Active Vista, organized by Dakila, the same holds true.

Active Vista with the support of the Royal Norwegian Embassy, Movies that Matter, The Asia Foundation and AusAID, announced last June 12 the winners of its ALAB Short Filmmaking Grant: 13 filmmakers, 13 human rights issues, 13 priority agenda for 2013.

“We have no illusion that a human rights film festival like Active Vista can change society. Even Lino Brocka’s Orapronobis failed to stop human rights violations after EDSA,” said Noel Cabangon, musician-activist and Vice President of Dakila.


“But we do aspire to spark some change by daring filmmakers and advocates to get out of their comfort zones to make films that grab you by the collar, make you see the reality that surrounds you and move you into action. By granting 13 filmmakers the opportunity to wield their vision into a reality, Active Vista hopes to at the very least make a dent by challenging its audiences to change the way they look at things with hope that maybe the things they look at may eventually change. Perhaps, one viewer at a time,” he added.


From the 57, only 13 were selected to receive short film production grants to produce their films based on their advocacies.

Active Vista Festival director and Dakila’s executive director Leni Velasco explained: “Dakila believes that these 13 filmmakers will trail blaze a new path not only in independent filmmaking in the Philippines but also in the human rights movement. Their films, which aspires to depict compelling human rights stories hopefully will not only echo the stories of people whose freedom and rights are trampled upon or give voice for those who suffer in silence but also stimulate passionate discussion about human rights among the Filipino audiences.”

The 13 short films are set to premiere in August 2012 and will be screened in 20 cities nationwide during the Active Vista Film Festival run. Winners of the top prizes shall be awarded during the Festival Closing on December 2012.

“The interesting blend of young filmmakers and seasoned human rights advocates in the ensemble whose fresh takes and innovative approaches to advocacy films contribute greatly into mainstreaming human rights into the consciousness of the Filipino public. The 13 issues tackled in these short films are the priority issues that our Government needs to address especially now that our nation is set to elect a new batch of leaders in 2013,” Velasco further explained.

Active Vista Human Rights Film Festival will open in July 2012 at Metro Manila, travel to 20 different cities in the Philippines and culminate with the main festival in December.

For more information about the Active Vista Film Festival, contact Dakila at 0917-5057055.