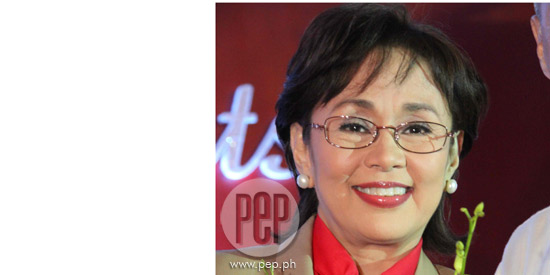 Ms. Vilma Santos (in photo) will co-star in The Healing with young actress Kim Chiu.

After 50 illustrious years in showbiz, Batangas governor Vilma Santos will celebrate by returning to the big screen. The Star for All Seasons is slated to topbill a Chito Roño film titled The Healing.

Vilma's 50th anniversary movie is equally monumental as this is her first-ever suspense-horror movie.


"It's a perfect project after In My Life, which was three years ago. And since I don't do movies that frequent, I might as well give the public something different," said Vilma. "This is my first time to do a suspense-horror and I’m so proud of it."

Governor Vi feels privileged by the chance to work with veteran director Chito Roño. "I've been asking for so long for something this and I'm so glad that it's finally happening. With the undeniable top caliber of Star Cinema, Direk Chito, and our award-wining cast, how can I go wrong!" she remarked.

Governor Vi is also excited to work with ABS-CBN actress Kim Chiu, who is cast as her stepdaughter in the movie.

“Honestly, Kim is a great actress and I can feel that her career will surely go far in showbiz," Governor Vi was quoted as saying.

In a previous interview with Kim, the young actress revealed that she will a character with a doppelgänger. This term, which literally means "double walker" in German, refers to a ghostly double of a living person, typically representing evil or misfortune.

The Star for All Seasons believes that The Healing offers a new brand of suspense-horror that will leave a mark in Philippine horror cinema.


"Stories about the Filipino tradition of going to faith healers for guidance and treatment of ailments have not yet been tackled in-depth in movies. And in our film, the viewers will not just be horrified, they'll somehow be challenged to think as to how faith healing has already been part of the our culture," Vilma narrated.

The Healing opens in cinemas nationwide on July 25, 2012.