Jake Cuenca excited to work again with Lovi Poe; he will do intimate scenes with Baron Geisler in an indie film 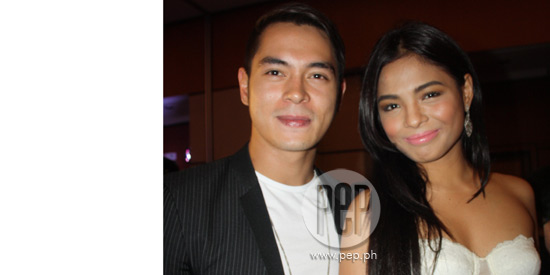 In the Joel Lamangan film Lihis, Jake Cuenca is cast as the husband of Lovi Poe. However, his character also has feelings for his comrade portrayed by Baron Geisler.

Jake Cuenca is currently being seen in ABS-CBN’s afternoon soap opera Kung Ako’y Iiwan Mo and he will soon be seen in the Kapamilya primetime teleserye Kahit Puso’y Masugatan.

In this teleserye directed by Wenn Deramas, he will get the chance to work with Gabby Concepcion, Iza Calzado, and Andi Eigenmann.

During the press conference held yesterday, July 2, for YES! Magazine’s 100 Most Beautiful Stars, Jake said that his character in the primetime project will be totally different from the role in his afternoon soap.

Will he and Gabby be fighting over Iza Calzado in this teleserye? “Parang ganun.”

ON LIHIS. Aside from his upcoming teleserye in ABS-CBN, Jake will soon be working on an independent film titled Lihis.

“It’s my first time to work with Baron. It’s a great idea.

Last March, Jake and Baron both tied in the Best Supporting Actor during the 28th Star Awards for Movies. Jake won for for the movie In The Name Of Love while Baron bagged the same award for Asiong Salonga.

What prompted Jake to accept this project?

In Lihis, he portrays a member of the New People's Army. He develops a romantic relationship with his fellow NPA rebel, played by Baron Geisler. However, he ends up marrying Lovi Poe's character although he still has feelings for Baron's character.

Did he have hesitations about accepting this project because it contains intimate scenes with another man?

He admitted: "For me, a kissing scene is not really a kiss. If you ask actors, it's different when you have people watching you. Hindi naman ako kabado dun, okay lang sa akin."


Jake also pointed out that it’s not a big deal for him to portray a homosexual: “I’m very comfortable with my sexuality,” he stressed.

The Kapamilya actor had no qualms about accepting this project because he trusts his co-stars.

“Another reason why I’m doing it is because I’ll be with Baron Geisler, one of the greatest actors in the country. He’s a good friend of mine and may tiwala naman ako sa kanya.”

How daring will he be in this movie? “Let’s see,” he said with a smile. “Dun natin malalaman pag ginawa natin ang pelikula.”

Jake also clarified that even though his character and that of Baron are homosexuals, Lihis is not a gay film.

“This isn’t a sexy film. This is a very serious drama. You’re not going to watch this movie for the skin shown.

How is he preparing for his intimate scenes with Baron?

The ABS-CBN actor believes that Lihis has a serious message for society in general, especially since it depicts the lives of those who are fighting for their ideologies.


ON LOVI POE. This project marks the second time that Jake is paired with Lovi Poe since they previously worked with each other in the sexy drama My Neighbor’s Wife.

In September 2011, Jake brought Lovi as his date to the Star Magic Ball.

Jake stressed that even after doing the movie My Neighbor’s Wife, he and Lovi have continued communicating with each other.

He says about the daughter of Fernando Poe Jr: “We’re very good friends. One of the reasons why I’m excited for this movie is because Lovi Poe is also in it.

“It’s exciting to work with her again. Siyempre, My Neighbor’s Wife is a very good movie and this material [Lihis] is so much more substantial. Mas seryoso ang pelikula na ito.”

Will they ever go beyond their friendship and enter into a relationship?

Baron then pouted his lips as if to kiss Jake.

After joking around with Baron, Jake continued: “Lovi is an amazing actress and she’s a gorgeous girl.”