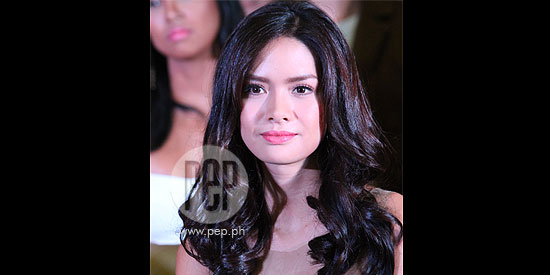 Erich Gonzales said that she met Mario Maurer's long-time girlfriend when she spent several days in Thailand to shoot the movie Suddenly It's Magic.

It’s not every day that you see the most beautiful faces in the showbiz industry but the YES! 100 Most Beautiful Stars, is an exception. Last July 2, the annual gathering of celebrities took place at the Richmonde Hotel in Eastwood City.


Erich Gonzales is one of the 31 stars included in the 2012 edition of YES! Magazine's 100 Most Beautiful Stars.


“I am very thankful and very happy to be a part of YES! 100 Most Beautiful Stars. If I'm not mistaken pang 3rd ko na po ‘to. Under primetime category,” said a grateful Erich during the media launch of the said special issue.

This marks the third that the Kapamilya actress earned a coveted spot in this year’s illustrious list. With her dusky skin and sweet smile, Erich is an actress who exemplifies Pinay beauty. The young ABS-CBN star feels humbled and honored by this recognition. Erich is known for her popular Kapamilya teleseryes (such as Katorse) that made her qualify for the Primetime category.

To date, Erich is working on Suddenly It's Magic, a Star Cinema movie with Thai actor Mario Maurer. The heartthrob is familiar to most Filipinos as a student named P’Shone in Crazy Little Thing Called Love.

Does he take care of you on the set? How?

Erich also revealed that she has met Mario’s girlfriend, Gubgib (Sumontip Leuangthai), who is a famous actress in Thailand. Gubgib frequently visited the set during their shooting in Thailand.

“I met his girlfriend. Nag visit siya sa set. They’ve been together for nine years. She would ask me what food I’d like to eat, then pagbalik niya may dala siyang food for everyone,” narrates Erich.

Since Mario is in a 9-year relationship with his Thai girlfriend, is Erich afraid that people won’t buy their love team in their movie?

This movie was shot mainly in Ilocos and in Bangkok, Thailand. How was it like shooting in Thailand?