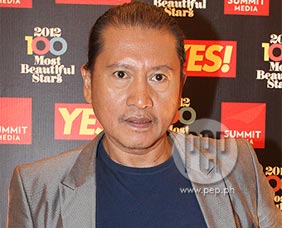 The Active Vista Human Rights Film Festival 2012 is set to travel in 20 cities in the Philippines to show short films that tackle human rights. 13 newbie filmmakers were tasked to produce films that advance its human rights movement. The 13 films will be screened in competition at the ALAB Short Films in November 2012. Veteran actor Ronnie Lazaro (in photo) is a member of the the human rights artists’ collective, Dakila, which organized this festival.

“This is the cinema that reminds us of the kind of power and emotions that only cinema can inspire in us: how a procession— an illusion, in fact— of images, can move us into action, if not change the way we view things.”

Thus says veteran actor Ronnie Lazaro who believes that the Active Vista Film Festival gives a cinematic experience that is beyond entertainment, one that pushes an audience out of apathy.

In its continuing efforts to utilize cinema as a medium in understanding human rights as an important foundation of nation building, Active Vista presents this year’s batch of Filipino films that tackle human rights. The traveling film festival that began in 2008, will traverse some 20 cities nationwide and will screen a selection of 60 films starting July to December this year.

As a part of this endeavor, the Dakila-Philippine Collective for Modern Heroism selected 13 recipients of the ALAB Short Filmmaking Grant from the batch of 57 aspiring filmmakers who made it to the Hasik Advocacy Filmmaking Seminar last May 2012. Dakila “believes that these 13 will trail blaze a new path not only in independent filmmaking in the Philippines but also in the human rights movement.”

The formal launching of the 13 short films will be this November, to be hosted by the Far Eastern University. The short films will likewise compete for the three top awards of the ALAB Short Film Competition in 2012. The winners will be announced on the Active Vista Human Rights Film Festival’s closing night in December.

The 13 filmmaking hopefuls came up with short films that focus on different human rights issues.

Arish Gonzalez, a freelance cinematographer, was inspired by the Hollywood film Taken, and thus his entry is on human trafficking. Delivery Man is about a cab driver who participates in the transport of women and in the film, he is confronted by the wrath of his victims’ families.

Zara Terrado, a story lover and a project coordinator in a local television network, enters the competition with Ang Huling Superhero, a sci-fi story on environment sustainability and climate change. In the film, the superhero is in search of a reason to keep saving the environment.

Mass communication graduate and feminist Veronica Santiago won an international jury award in the producer category of the 13th JeonJu International Film Festival in South Korea. A proud feminist, her short film entry deals with the right to reproductive health. Sa Wakas talks about a father who drives his bleeding daughter in his tricycle in search of a health center.

The youngest among the ALAB grantees is Ron Segismundo, a Multimedia Arts student of the College of St. Benilde. His love for children motivated him to produce Bakaw, a short film that deals with children’s rights and education. Bakaw narrates a day in a life of a kid who steals fish from vendors at the Navotas fish port.

Freelance director and editor Che Villanueva chose freedom of thought, expression and information, justice, good governance and democracy as the themes of her documentary, Janak Bayani. Her entry focuses on an underground rock band in Iloilo whom people perceive as satanic and disruptive.

Visual artist Richard Coronel uses his entry, Manila X, to translate his activism in film. After his firsthand knowledge of extra judicial killings, torture, and enforced disappearances, this artist aims to put an end to the barbaric art of extra judicial killings. Manila X, set in post-apocalyptic Manila, tells the story of a mother who defines selfless love as she faces violence.

Hiday Macarandas is barangay councilor in Maigo, Lanao del Norte and a Community Developer student of the Mindanao State University Marawi. She dreams of a community that pushes for social consciousness, hence her short film, The Veil, tackles peace as pervading predicament in Mindanao. Hidaya’s short film talks about a muslim woman’s veil and how it affects her in her everyday life.

Connet Ben is a clothing line entrepreneur, freelance web developer, writer, and a director. Her short film entry, Niceness, reflects her passion to freely do everything that she loves. Niceness deals with the freedom of thought, expression and information, justice, good governance, and democracy. The film takes its audience to the future where everything people say about the government is taxed.

Deaf advocate Dr. Liza Martinez is the founding director of Philippine Deaf Resource Center. While a newbie in filmmaking, she is driven by her passion to translate her advocacy on persons with disabilities, specifically deaf-related stories, into film. Her short film entry, Kubli, narrates the story of a deaf rape victim who struggles to prove his father, the rapist, guilty in a court with no sign language interpreters.

Rowena Sanchez is film and audio-visual communication graduate. Her entry, Pagtatapos, is a short film about the right to basic social services. The setting of the film happens on Graduation Day and follows the conversation between a 32-year-old coach and his favorite student.

News and current affairs director and cinematographer Jet Leyco was the grand winner of the ALAB Short Film Competition in 2010. He joins the competition this year because of his yearning to immerse himself in the advocacy of cinema. His main inspiration, exploring the vastness of peace— its complications and socio-political context, led him to produce Sapagkat Gabi Na. The film explores what happens when a man seeks refuge in a mountain after committing a crime.

A Cebuano artist, Victor Villanueva, champions persons with disabilities in his short film Growing Pains. The film entry is a teenage love story about a deaf man waiting for a sign to propose to the girl he loves. Victor is also the director of My Paranormal Romance, a Cinema One Originals Film Festival 2011 finalist.

Jolo, Sulu’s head turner, Brigite Salvatore, is a licensed nurse, freelance model, and fashion designer. A transwoman, it is her advocacy against gender discrimination that led her to join the competition. Model CiTizen, her film entry, is about the fight for gender equality as it chronicles the life of a Muslim transgender woman struggling to love a normal life.

For the screening schedules, visit www.activevista.com.